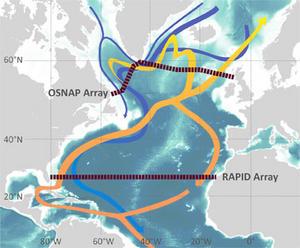 The National Oceanography Centre will lead the UK component of two projects to monitor the crucial ocean currents in the North Atlantic which shape Britain’s climate.

Science Minister David Willetts announced the projects this week  when he delivered the Mountbatten Memorial Lecture at the Royal Institution.

NOC’s owner, the Natural Environment Research Council has joined forces with the US’s National Science Foundation (NSF) and the National Oceanic and Atmospheric Administration (NOAA) to fund the two projects, together worth around £44 million ($70 million).

The ultimate aim of such monitoring is to improve long-term climate predictions and weather forecasts. During one of the projects, the Overturning in the Subpolar North Atlantic Program (OSNAP), which will run for five years, scientists from seven countries will set up an array of moored instruments and use autonomous gliders across the North Atlantic, along a line running from Scotland to Canada via Greenland. These will record ocean temperatures, salinity and the strength of currents in an area called the North Atlantic Subpolar Gyre. Total funding for this project is around £20 million ($32 million).

The team is interested in this region because the currents here, which are part of the so-called ocean conveyor belt, are known to be important for the Earth’s climate.

The conveyor belt is a system of ocean currents, which move heat around in the world’s oceans. In the Atlantic Ocean, warm upper-ocean water travels north, to the high northern latitudes, where it loses heat to the atmosphere. It’s this process that keeps the UK relatively mild in winter compared to other countries at similar latitudes. This water cools then sinks and returns southwards at great depth.

Despite its name, the image of a conveyor belt is misleading, because the process isn’t smooth and continuous. Instead, the belt can stretch, rumple, fray or even stall. This means the strength of currents in the global conveyor belt can vary significantly. As these currents are strongly linked to our climate, the aim of the OSNAP array is to understand the connection between these variations and Britain’s weather.

Science Minister David Willetts says “It is fitting that a project to better understand what affects the global climate, given the British fascination with weather conditions, has UK involvement.”

“Not only will this funding improve our understanding of the planet’s climate through innovative research, it will highlight the importance of one of the eight great technologies - autonomous and robotic equipment. The autonomous gliders being used for this project are helping to revolutionise climate research and are contributing to world class science.”

Dr Sheldon Bacon of NERC’s National Oceanography Centre (NOC) will lead the UK component of OSNAP (UK-OSNAP). He says “In the high latitudes of the North Atlantic, and the Arctic Ocean that it connects to, the ocean can efficiently imprint its memory on the atmosphere by releasing the huge amounts of heat stored in it. And with average global temperatures currently rising by 0.75°C every hundred years, we need to be able to forecast how the climate might change before our descendants face the consequences.”

While the US will lead the measurement aspect of OSNAP with contributions from Canada, the Netherlands, Germany and the UK, Bacon and colleagues will also interpret data from OSNAP using computer models.

Scientists aim to start monitoring in July 2014, and will continue until 2018.

In the other project, NERC, NSF and NOAA will continue funding an array of moored instruments between the Canary Islands and Florida called the RAPID monitoring array, to the tune of around £24 million ($38 million). This collection of instruments has continuously monitored the strength of the North Atlantic portion of the global conveyor belt since 2004. RAPID is scheduled to run for an additional six years.

Professor Meric Srokosz, also of NOC, is NERC’s science coordinator for RAPID. He says “The unexpected stalling of the conveyor in 2009–10 observed by the RAPID array, but not captured by state-of-the-art climate models, gives impetus to continuing the observations begun in 2004. The observations are unique and tell us about the role of the ocean in the climate system, as well as providing a means of testing and improving the models used for climate predictions, on which government policy is based.”

Professor Duncan Wingham, chief executive of NERC, says “NERC is delighted to be collaborating with NSF, NOAA and many other international agencies and researchers on these hugely important projects. The findings from OSNAP and RAPID will be crucial for helping us understand how changes in Atlantic currents affect both the climate and the weather, especially in Britain.”