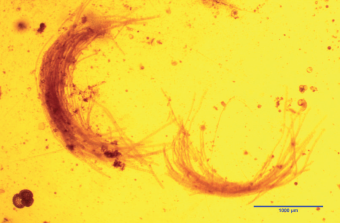 A new study led by the National Oceanography Centre (NOC) reveals that that dust generated by land erosion has large repercussions for oceanic processes and planetary climate. Wind-driven Saharan dust to the remote Atlantic Ocean not only provides phytoplankton with essential nutrients to promote their growth, but the dust particles themselves are ballasting these carbon-rich microscopic plants, making them heavier and, causing them to sink faster to the seafloor.

Published in Nature Geoscience, the study highlights that the amount of carbon that sinks to depth in the dust-rich northern Atlantic is double that at the southern Atlantic, which receives ten-times less Saharan dust.

The oceans remove carbon dioxide from the atmosphere with the help of photosynthetic organisms known as phytoplankton. Just like terrestrial plants, phytoplankton use sunlight and nutrients (nitrogen, phosphorus and iron) to convert carbon dioxide into organic carbon. Unlike terrestrial plants, decomposing phytoplankton can sink to the bottom of the ocean, drawing this organic carbon down with them and locking it up in the abyss for centuries. This process (known as the biological carbon pump) is crucial for regulating our climate.

The central North and South Atlantic gyres are extraordinarily unproductive as the intense solar heating causes stratification, which in turn, blocks deep-water nutrients from reaching phytoplankton residing in the surface ocean. In these regions, Saharan dust provides the essential nutrients to fertilise these ocean deserts and, until now, their potential to trap atmospheric carbon in the interior has been poorly understood.

NOC lead author Dr Katsia Pabortsava explains “We have long known that nutrients and especially iron from dust clouds promotes primary productivity in the remote oceans. However, our results show that the dust particles can also get incorporated into phytoplankton colonies increasing their preservation and sinking speeds and hence increase the amount of carbon that reaches the deep ocean. We now have to rethink how much these nutrient-poor oceanic regions contribute to carbon sequestration and ultimately our climate”

To collect particles of sinking phytoplankton, funnel-shaped sediment traps attached to deep-sea moorings were submersed at 3000 m depth at two sites in the North and South Atlantic gyres. Data were collected over a three-year period and form an integral part of UK-led array of sustained open-ocean observatories and the ongoing Atlantic Meridional Transect research programme.

Predicted changes in our Earth’s climate will alter wind circulation patterns and therefore the amount of dust that will reach these gyres, influencing the amount of organic carbon that is exported to our deep sea.

This study highlights the urgent need for a better understanding of the biological pump functioning in these nutrient-limited oceans.