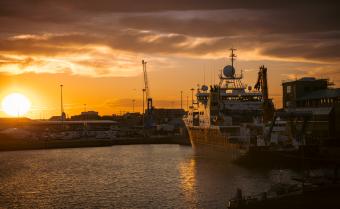 Scientists from the National Oceanography Centre (NOC) have set-sail on the RRS James Cook on a collaborative expedition to the Whittard Canyon to advance knowledge of some of the richest and most complex deep-sea ecosystems on Earth.

Submarine canyons are challenging to study, with very steep sides, vertical cliffs and overhanging rock formations. Part of the Whittard Canyon system is recognised as a UK Marine Conservation Zone, and an important home for a variety of species, including cold-water coral reefs, clams, deep-sea oysters. It is a key area for understanding the interaction between coastal, shelf waters and the open ocean, however there are currently gaps in knowledge in how the system responds to human impacts such as climate change and bottom trawling.

Scientists will address these knowledge gaps by collecting sustained ocean observational data of the canyon using state-of-the-art robotic and Autonomous Underwater Vehicles (AUV) equipped with the latest sensors. The JC237 marks the first science expedition for AUV Autosub 5, developed as part of the Oceanids programme, which recently completed final commissioning trials. The team will also revisit several locations previously surveyed to investigate changes in the seabed and animal communities as a result of natural and human disturbances.

This long-term monitoring will empower future conservation decisions, which can also be applied to other marine protected areas, to help to preserve these unique environments. This contributes to global goals of ocean protection outlined by the UN Ocean Decade.

Find out more about the fleet of ships and equipment, including the RRS James Cook and BoatyMcBoatface, we operate on behalf of the science community here.