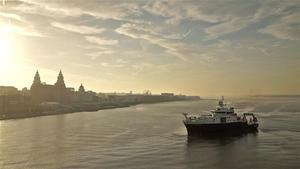 The RRS Discovery is in Liverpool this week as part of a unique celebration of the best of British environmental science being showcased by the Natural Environment Research Council (NERC) alongside the National Oceanography Centre (NOC).

This state-of-the-art, 100-metre-long research vessel arrived into the city on the morning of the 4 October, showing off her state-of-the-art azimuth propulsion systems by rotating 360 degrees in the middle of the river before coming alongside the cruise terminal. She was accompanied into Liverpool by jet-spraying tug boats.

The ship will be moored on Liverpool Waterfront from 4 to 7 October as part of a series of free showcase events in the North West taking place throughout October, called Into the blue. This is only the second time she has visited the city.

Operated on NERC’s behalf by the NOC for the UK’s marine science community, RRS Discovery, provides access to the global ocean from the tropics to the poles, underpinning the UK’s leadership in marine science. As well as conducting more traditional marine research, she can deploy NOC’s innovative underwater equipment such as the remotely operated vehicle (ROV) Isis and Autosub autonomous submersibles.

Professor Edward Hill, Executive Director of the National Oceanography Centre said, “We are delighted to bring RRS Discovery into the great maritime city of Liverpool where she is moored alongside the city’s iconic waterfront. Discovery is one of the world’s most advanced research ships and we hope it will help bring to life the world- class science she supports and its importance for the people of the northwest - helping better predict weather and climate, protecting us from flooding and informing how to sustainably secure food, clean energy, and even medicines from the ocean in future. We hope our programme of schools and colleges visits to the ship will inspire interest in science, the ocean and opportunities for careers I the maritime sector.”

NERC is keen to show Discovery to the public, schools and businesses in the northwest to demonstrate some of the best environmental research she’s involved in which uses the unique marine science equipment she has on board. The ship is used by the country’s leading scientists for a range of cutting-edge studies, including weather, deep-ocean and climate research.

Into the Blue comprises nine days of events taking place in both Liverpool and Manchester. The UK’s FAAM (Facility for Airborne Atmospheric Measurements) aircraft will take centre stage at Manchester Airport from 25 to 29 October and will be accompanied by a huge range of exhibits that showcase the best of British environmental science. The specially adapted BAe 146-301 aircraft is the UK’s front line for investigating air pollution, weather patterns and cloud formations.

In total, around 1350 people are booked to come on board the ship during the week. All tours are now fully booked, but you can admire the ship on Liverpool Waterfront on Princes Parade. She will be illuminated at nightfall, and will leave the Liverpool dock around 4.50pm on Friday.

Although she has visited Liverpool before, she has never visited with some of the UK amazing marine facilities equipment or showcased the science she undertakes on behalf of the UK and its scientific community.

NERC-funded research in the North has helped to