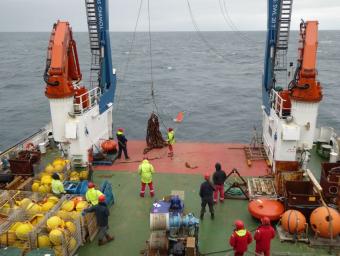 On 8 October RRS Discovery sailed from Southampton to the Iceland Basin and Rockall Trough, as part of a research expedition aimed at enhancing understanding of the role of this critical part of the ocean in the climate and weather in Europe and the Arctic.

Currently a lack of measurements of the how much heat and freshwater is carried northwards by the North Atlantic subpolar gyre is holding back the progression of understanding about the relationship between ocean currents and UK climate .

Scientists know that the gyre currents bring warm waters flowing past the UK, and that heat from the ocean is released into the overlying air. When the currents change and the surface ocean becomes warmer, UK and Europe can experience winter weather that is colder and more severe than usual. What is not clear is exactly how changes in the ocean to the west of the UK are driving our weather and climate.

To address this gap in the data, the crew, scientists and technicians on board the RRS Discovery will recover and re-deploy moorings that have been continuously measuring velocity, temperature and salinity for the past two years. They will also collect a series of salinity, temperature and oxygen profiles from the sea surface to the seafloor.

Additionally, the expedition will visit the Darwin Mounds Marine Protected Area to gather data that will help explain the role of local ocean currents in nurturing the regrowth of deep-cold-water corals following damage inflicted by fishing and natural hazards.

The growth of cold water corals depends on the supply of food from the sun-lit surface layer of the ocean and carried to the corals by currents. Scientists expect to find that the strength of the currents is one factor in determining how well the slow-growing coral mounds have recovered after seafloor trawling was banned in the area in 2003.

This research expedition forms the latest in a long series of visits to this remote region of the eastern North Atlantic, which have been going since 1975.

COVID19 has caused the delay of this year’s expedition to a windier time of year, and restrictions on the number of people allowed on board. The scientists and technicians will be tackling only highest priority activities at sea, working to minimising impact on the long-term research of the two programmes.