RRS Discovery departs ahead of an expedition to South Georgia 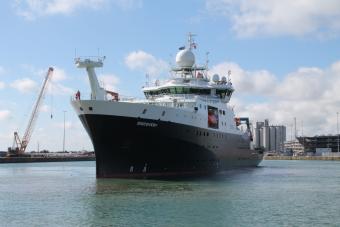 Tomorrow morning the royal research ship (RRS) Discovery will leave Southampton for an ambitious science expedition to the waters around South Georgia.

This expedition will take place around 100 years after the Discovery committee was set up and later commissioned a series of investigations in the same area, around South Georgia. These investigations were onboard the original RRS Discovery, first used by Captain Scott, and laid the foundations of modern biological oceanography.

The science conducted on this latest expedition will be key to dramatically improving our understanding of how the climate is affected by life in the ‘twilight’ zone, this is the part of the ocean between 100 and 1000 metres, which only a vanishingly small amount of sunlight reaches. Small creatures in the twilight zone catch and intercept material sinking from the sea surface, leading to the carbon in this material being stored in the ocean rather than in the atmosphere. This programme, called the COMICS project, will involve catching sinking material using world-leading, instrumentation, as well as investigating the tiny plants and animals that make-up the ecosystem that stores carbon in the ocean. The region around South Georgia contains some of the largest and most intense blooms of ocean life found anywhere in the world. This means this programme will be sampling a real global hotspot of ocean biological carbon storage.

Principal investigator of the COMICS project, Professor Richard Sanders from the National Oceanography Centre (NOC), said “As an ocean biologist I am really excited to be returning to South Georgia onboard the Discovery for the first time since the Discovery Investigations took place. It is amazing to think how far ocean biology has come since those investigations, which took place less than one hundred years ago.”

Both the original Discovery Investigations and this expedition are focused on answering some really fundamental questions. A better understanding of the movement of carbon in the ocean’s twilight zone is really vital for understanding many aspects of oceanography, as well as the climate.”

It is currently known that the efficiency of carbon transport from the atmosphere through the twilight zone is key to regulating atmospheric CO2 levels. However, the processes that control the efficiency of biological storage of carbon in the deep ocean are not well known, which is an obstacle to predicting how they may change. By investigating carbon dynamics in the ocean interior, COMICS will help to improve predictions of future global climate change.

The COMICS project is led by the NOC and is a collaboration between the British Antarctic Survey and the universities of Queen Mary London, Liverpool, Oxford and Southampton. The project has received funding from the Natural Environmental Research Council.