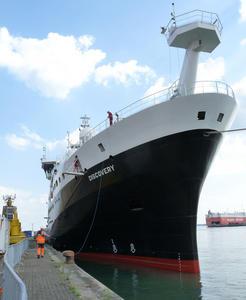 The new Royal Research Ship Discovery has arrived in Southampton for the first time. Over the coming weeks the officers and crew will put her through her paces while conducting equipment trials.

At almost 100-metres in length, with a displacement of 6,075 tonnes, Discovery carries a crew of 24 and accommodation for 28 scientists and technicians. She will be formally named on 10 October at a ceremony alongside NOC in Southampton.

The vessel was built by CNP Freire, SA, in Vigo, Northern Spain and represents a £75 million investment in ocean science by the Government’s Department for Business Innovation and Skills (BIS). Discovery joins the RRS James Cook, previously accepted into service in 2006. Together they will form one of the most modern research vessel fleets in operation anywhere in the world, maintaining the UK’s capability to work at the frontier of ocean research.

The royal research ship will be operated by the NERC-owned National Oceanography Centre’s (NOC) National Marine Facilities Sea Systems group, based at the Southampton Waterfront Campus. She will undertake a programme of technical trials to ensure its readiness to support the complex range of scientific activities required by the UK marine science community. Discovery is expected to be ready to undertake her first science cruise in early 2014, and is then scheduled to support a series of six cruises for the Shelf Sea Biogeochemistry research programme, which is co-funded by NERC and the Department for Environment, Food & Rural Affairs (Defra), with a budget of £10.5m. The programme directly relates to the delivery of NERC Earth system science and is aimed at reducing the uncertainty in our understanding of nutrient and carbon cycling within the shelf seas, and of their overall role in global biogeochemical cycles. The programme will also provide effective policy advice and make a significant contribution to the Living With Environmental Change programme.

The multidisciplinary vessel has seismic capability, sub-bottom profiling and multibeam equipment, while its dynamic positioning capability allows it to support a wide range of over-the-side operations, including deployment of NERC’s Isis Remotely Operated Vehicle (ROV) which can work at depths down to 6,500-metres.

NERC’s Chief Executive, Professor Duncan Wingham, said “The RRS Discovery is an important landmark investment in maintaining the UK’s commitment to marine science of global reach and importance, and is an affirmation of NERC’s commitment to undertake science that has important societal and economic impacts, both for the UK and globally.”