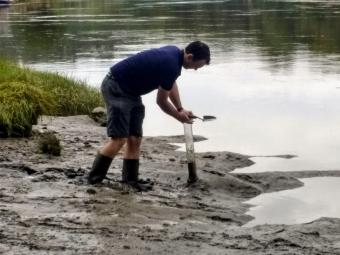 This week, scientists from the NOC attended the annual ICOS Science Conference, which brought together over 1000 researchers working to measure greenhouse gas emissions across Europe.

In one of the sessions NOC scientists highlighted the significant, yet under-studied, role of land-ocean carbon export in greenhouse gas emissions.

Chaired by NOC scientist Dr Daniel Mayor and joint NOC/NORCE scientist Professor Richard Sanders, many of the presentations showcased results from the NOC-led LOCATE project. LOCATE was an ambitious project covering around 50% of the landmass of Great Britain for a whole year and demonstrating the feasibility of landmass scale, cooperative monitoring of land-ocean carbon export. The project delivered new, quantitative understanding of country-scale carbon fluxes and the processes that control them. An important conclusion was that human activities on land exert a significant control on both the quantity and type of carbon entering the aquatic system, and what happens to it once it is there.

NOC land-ocean biogeochemist, Stacey Felgate, built on these findings to present a blueprint for a new pan-European aquatic carbon monitoring network. This network would greatly improve our understanding of how human activities influence the ocean, and would improve our ability to accurately quantify continent scale greenhouse emissions. It is the result of a four year multi-institute collaboration led by NOC’s Daniel Mayor, and involving over 30 scientists from across Europe, each an expert on one aspect of the complex range of aquatic systems that transfer carbon from land to the open ocean. These aquatic systems include streams, lakes, rivers, estuaries, wetlands, and shelf seas.

Stacey Felgate said “For more than five years, NOC scientists have been working to establish the importance of land – ocean carbon export, on the marine environment, and the global carbon cycle and climate system. Studying such a diverse range of environments is only possible through collaboration across many disciplines, and it’s really exciting to see a community of researchers with an appetite for this kind of multi-disciplinary research evolving.”

In his role as director of the ICOS Ocean’s Thematic Centre, Richard Sanders also presented an ambitious plan for a well-funded ‘digital ocean’. Richard called for investment in a monitoring network that can deliver near real-time ocean measurements, akin to today’s meteorological weather stations. This would allow real-time forecasting of the ocean carbon sink and rapid reporting to the global organisations responsible for setting climate targets.

Catch-up on the ICOS conference on twitter using #ICOS2020SC