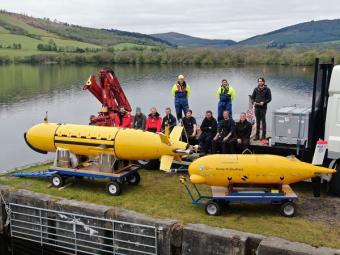 Engineers from the National Oceanography Centre (NOC) have returned to Loch Ness in Scotland for the latest trials of new, state-of-the-art robot submarines that will be a central part of the future net zero oceanographic research infrastructure.

The trials, which are the latest phase in the NOC’s Oceanids Programme, come as the NOC calls for the investment in new technologies to increase the volume and rate of the gathering of global ocean information, without necessarily increasing the member of research vessels needed, at the COP26 conference in Glasgow.

The Oceanids Programme will see two new autonomous underwater vehicle (AUV) classes delivered. Autosub Long Range (ALR), better known as Boaty McBoatface, which was showcased on board the RRS Sir David Attenborough at Greenwich last week, is capable of being deployed for up to three months and reaching depths of up to 6,000 m. The fleet of six ALRs will open new opportunities for lower cost shore-based scientific missions and under-ice exploration. The latest trials will be testing ALR’s under-ice capability ahead of deployment for science missions in 2022.

Autosub A2KUI is now in the final stage of its work up to open ocean trials, ahead of its anticipated commissioning into the National Marine Equipment Pool, where it will provide UK scientists with access to the latest in high-power autonomous platform technologies, for deployments anywhere in the world’s oceans.