A review of ten years of ocean carbon transport research 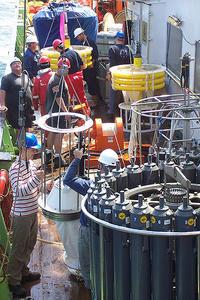 Ten years of work into the transport of carbon from the surface ocean to the deep ocean interior, has been brought together in a landmark paper published in Geophysical Research Letters.

This research shows that multiple mechanisms drive carbon flux into the ocean interior, with different mechanisms operating in different regions. From this research it can be inferred that biological carbon sequestration, by ecosystems, will be more resilient to environmental changes than previously thought. The lead author, Dr Frederic le Moigne, formerly a research scientist at the NOC, and has now moved on to a prestigious fellowship at IFM-Geomar.

The sinking (or ‘export’) of carbon, from the surface ocean to the interior, is a key element of the global carbon cycle. The oceanic biological carbon storage it drives is a key ecosystem service, which keeps atmospheric CO2 levels at 200ppm, or about 30% lower than they would be if the oceans were abiotic. Understanding how this flux operates is therefore key to predicting how future atmospheric CO2 levels will be affected by environmental change.

Large sinking particles are the key to understanding the downward flux of carbon. Two decades ago it was thought that these were predominantly formed by ecosystem processes, such as grazing (the consumption of phytoplankton by small crustacean zooplankton) and aggregation. About 15 years ago another elegant hypothesis was developed to explain their formation, based on deep ocean correlations between biominerals and carbon fluxes. This ‘ballast hypothesis’ suggested that the inclusion of biomineral fragments was the key to determining flux, because they impart excess density to the particles they sit in. Environmental changes, such as ocean acidification, have the potential to affect the production of ballast biominerals in the surface ocean. Therefore, understanding whether this ‘ballast effect’ is important in surface waters is a high priority task.

Over the last 12 years NOC has been systematically estimating surface fluxes of both biominerals and organic carbon using the 234Th technique in a range of regions. These include the Southern Ocean, as part of the CROZEX programme on natural iron fertilisation in the Southern Ocean, GEOTRACES cruises focused on ocean micronutrient cycles and UK Ocean Acidification Cruises focused in polar regions. Over a hundred stations were occupied, leading to enough data to attempt a Pan – Atlantic synthesis.

The results clearly show that a large fraction of flux is not associated with any ballast mineral at all, with the ballasted fraction being driven by both calcite and opal ballasting. This mix of mechanisms likely means that flux is resilient to forthcoming environmental changes Professor Richard Sanders said “We have shown that in the surface ocean both ecosystem effects and ballast availability are key to driving down ward flux.” Future research will focus on understanding what controls the depth at which the non-ballasted fraction is converted back into CO2, a parameter which we know is intimately linked to atmospheric composition.