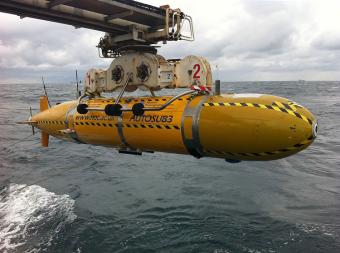 NOC scientists and engineers have contributed to a new study, published in Nature Communications, that provides new insights into how giant density-driven submarine flows are able to travel thousands of kilometres into the deep ocean.

The research team coupled state-of-the-art marine robotic technology with recent advances in fluid dynamics. The results show that, despite forming spectacular channels on the seafloor (hundreds of kilometres long in some cases), the previous theory relating to density-driven flows as underwater rivers is flawed and instead the flows have more in common with jet streams in planetary atmospheres.

Previous theory has been restricted because of the difficulties in measuring these typically highly energetic and intermittent flows in the deep ocean, meaning past research on density-driven flow dynamics has largely been based upon limited scale laboratory and numerical models.

The team therefore investigated a continuous density-driven flow generated by dense salty water spilling over from the Mediterranean into the comparatively fresh waters of the Black Sea, via the Bosphorus Strait. The density-driven flow is focussed through a channel on the sea floor and transports 22,000 cubic metres of water every second – a volume comparable to the largest rivers on the Earth’s surface. The Black Sea flow provides a unique natural laboratory to study the dynamics of sea floor density-driven flows.

The team were able to measure this flow in unprecedented detail by flying a robotic submarine called Autosub3, developed and operated at NOC, within the channel a few metres above the sea floor. Once launched, the submarine operated autonomously for several hours before returning to the surface ship with its data, which included direct measurements of the speed and direction of the flow.

Prof Russell Wynn of NOC was Chief Scientist of the research expedition that collected much of the data. He said: “This latest research highlights the important role that marine robots are playing in advancing our understanding of fundamental physical processes in the ocean. The NOC Marine Autonomous and Robotic Systems (MARS) team persevered in challenging conditions, and ultimately delivered a dataset that changes our view of these giant submarine flows.”