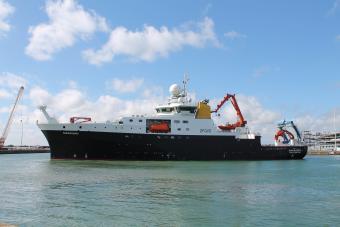 This week the Royal Research Ship (RRS) Discovery set sail to the Rio Grande Rise in the South Atlantic, 1400 km east of Brazil, to investigate cobalt-rich mineral deposits of interest to potential deep-sea mining. This expedition is part of the Marine E-tech project, which is an international collaboration between the NOC, the Brazilian University of Sao Paulo, British Geological Survey (BGS), HR Wallingford and the UK Universities of Edinburgh, Bath and Leicester.

This expedition will use robotic vehicles, moored scientific instruments, and novel sampling methods to study the environment that deep-sea mineral deposits form in. Of special interest are crusts of iron and manganese rich in cobalt and other metals, as well as how their geological evolution, over tens of millions of years, affected the formation of these mineral deposits. The team includes biologists studying the vulnerability of deep-sea fauna to disturbances that would arise if the sites were mined.

The Autosub6000 robot sub will be launched from RRS Discovery to map the Rio Grande Rise in extraordinary detail. Using high-frequency sound waves, the seafloor can be mapped with a resolution high enough to see rocks and boulders a few tens of centimetres across. The sub will also create black and white images of the seafloor showing where the mineral deposits are located. Once the team have mapped the area, high definition video cameras on the robotic underwater vehicle HyBIS will be used to enable scientists on board to explore and photograph features on the seafloor, including a huge rift over 1000m deep, mysterious sinkholes and the ancient remains of beaches long since drowned.

Prof Luigi Jovane, head of the University of Sao Paulo team, said "The University of Sao Paulo is really happy to be working with the National Oceanography Centre on the MarineE-tech project and especially on this voyage of the RRS Discovery. The Rio Grande Rise is of great interest to us, not just for the mineral deposits, but also the palaeoceanography of the area, how it formed and how it drowned. The Rio Grande Rise has played a major role in the circulation of the deep-Atlantic over the past 40 million years, and this has left a record in the sediments, the geology and the cobalt-rich crusts of the area".

Professor Bramley Murton from the NOC, and Chief Scientist of the expedition, said “Formed 72 million years ago and submerged 22 million years ago beneath 3000 metres of ocean, the relatively shallow Rio Grande Rise is a lost land of dinosaurs, ravines and plateaus the size of Wales. It is of interest for seafloor mineral deposits rich in iron, manganese and other metals important to modern society. Two of these in particular are critical to any future efforts for renewable energy: cobalt and tellurium. Cobalt is essential in rechargeable batteries that are needed if we are to move to electric vehicles. Tellurium is essential for high-efficiency solar-electric power generation. Although our work is focused on the potential of deep-sea mineral deposits and possible mining, the results could help reduce our dependence on environmentally damaging carbon-based energy.”

The project was initiated by the Natural Environmental Research Council (NERC) and is jointly funded by the governments of the UK and the State of Sao Paulo, Brazil.