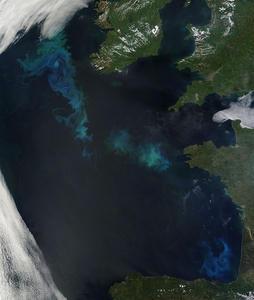 Saharan dust is coating our cars and irritating our lungs – but what else is it doing?

The iron that gives Saharan dust its red colour acts like fertilizer in the open ocean. Sunlight and warmer weather provide the perfect conditions for spring blooms – vast areas of ocean covered in plant growth typically in springtime.

Out in the Atlantic Ocean this iron is an essential nutrient which is needed for growth of masses of microscopic plants – phytoplankton. This provides fodder for tiny animals, the zooplankton, and in their turn, food for fish and larger ocean beings.

This sudden, lush growth of plant life is as significant to controlling the amount of greenhouse gases in the world as the contribution of tropical rainforests. These forests of the ocean may be rootless and transient but their take-up of carbon from the atmosphere reduces the amount of CO2 heating the planet.

Far away from the coastline where rivers deposit sediments, sewage and excess fertilizers into estuaries and deltas, seawater is surprisingly low in iron. Although it is abundant in soils, the open ocean cannot hold it in solution for very long. Yet it is a micronutrient that is vital for kick-starting the ocean food chain. In the parts of the North Atlantic where there is a plentiful supply of wind-driven dust, there is no shortage of opportunities. Back in 2010 the Icelandic volcano Eyjafjallajökull erupted tonnes of iron-rich dust into surrounding seas causing a spike in ocean productivity.

It is a different story in the South Atlantic where, apart from the occasional scattering of remote islands, there is the endless tract of blue on the global map. Seabirds form crowded colonies on small outcrops of rock where water runoff provides the iron essential for creating the rich feeding grounds in these waters. Elsewhere, the ocean is a desert.

Professor Richard Lampitt of the National Oceanography Centre is comparing and contrasting the effect of iron in both hemispheres. He has been measuring the impact of iron in the ocean and how carbon is transported from the surface of the ocean to be locked away for millennia on the seafloor. “There is no doubt that the supply of dust from the Sahara radically alters the structure of plankton communities and enhances the downward flux of organic material into the deep ocean”, he said.

There is a global network of ocean observation sites and Professor Lampitt is responsible for co-ordinating the European Fixed point Open Ocean Observatory network, FixO3, which has sites from the Greenland Sea, north and south Atlantic, the Mediterranean and the Antarctic waters of the Southern Ocean.

Key among these is the Porcupine Abyssal Plain observatory, sited in a vast area of flat seafloor nearly 3 miles (4800 metres) deep in the Atlantic Ocean. Southwest of Cornwall, its close proximity to the UK makes it an ideal place for the site of an ocean observatory. For more than 20 years, oceanographers have been retrieving information about plankton blooms – their frequency, the conditions that trigger them, and crucially how much of the bloom and the associated animal material makes it to the seafloor.

Marine snow is the romantic term oceanographers use for dead plankton material and plankton poo. As marine plants are munched and zooplankton eat and are eaten, this carbon-rich material descends through the water column and around 1% of it finds it way to the seafloor. This carbon is sequestered from the carbon cycle and is key to how the ocean regulates and modifies extremes of climate. Without this buffering role of the ocean, atmospheric carbon dioxide would continue to retain heat and our planet would warm dramatically.

Prof Lampitt is keen to investigate this aspect further “Some 25 years ago, it was suggested that the planet could be cooled by adding iron to the oceans. This was because the productivity of the oceans affects CO2 concentration in the atmosphere and itself is limited in much of the ocean by inadequate concentrations of iron. Although some companies sprung up to take advantage of commercial opportunities, the scientific community managed to halt any reckless behaviour and ensure that appropriate legislation was introduced. There is now an urgent need to carry out properly controlled experiments and computational modelling to find out whether such fertilization really has the potential to reduce global temperatures.”

It is ironic that the Saharan dust causing this bout of pollution will ultimately be responsible for mopping up the carbon dioxide that causes pollution and climate change.

FixO3 is a European research programme co-ordinated by the National Oceanography Centre www.fixo3.eu.