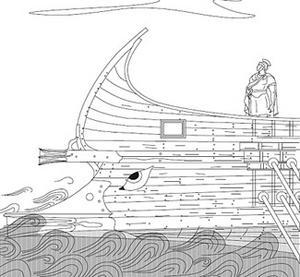 Scholars from five research institutions led by the National Oceanography Centre (NOC) in Southampton have analysed a rare 20kg bronze ram from an ancient Mediterranean warship. Known as the ‘Belgammel’ Ram, it is named after the site where it was discovered off the coast of Libya, near Tobruk.

Ancient oared warships, such as the triremes beloved of Hollywood sword-and-sandals epics, were equipped with a vicious bronze ram at the waterline, and a secondary ram called a ‘proembolion’ higher up, designed to smash the oars and outriggers of enemy ships.

Research on the Belgammel Ram was co-ordinated by Dr Nic Flemming, a visiting fellow of the NOC, and involved scientists from the Universities of Southampton, Bristol and Belfast.

The Belgammel Ram is 64cm long and weighs just less than 20kg. It is a complex solid bronze casting. It was produced either by the ‘lost wax’ process, or poured into a sand mould with a central core in one operation. The metal has no joints and the ram was probably cast lying on its side.

Small fragments of wood were found inside the ram, and Dr Chris Hunt and his colleagues at Queen’s University Belfast have used carbon dating to give a most probable date in the range 329–203 BC. If that is the date that the tree was cut down, the warship was built probably during the third or second century BC, and sank later.

Working from sculptures, drawings on pottery, other finds and ancient literature, Dr Anthony Parker (University of Bristol) concludes that the ram is typical of small warships of the Hellenistic and Roman periods, and could date between 200 BC and 200 AD.

The wood inside the ram has been burnt, which suggests that the ship may have burned and sank, perhaps in battle or as an accident caused by a fire on board. The metallurgy of the bronze metal does not suggest that it was exposed to a prolonged fire after casting, so the ram may have fallen into the sea soon after the hull was weakened by fire.

At the time that the Belgammel Ram was cast, the technology of creating large objects in bronze was understood to the point of perfection. Beautiful statues cast with thin metal mouldings by the ‘lost wax’ process such as the great Poseidon in Athens, or the Warriors of Riace in Italy, are artistic works beyond compare. The Belgammel Ram is an example of a more functional or industrial style, but still gracefully decorated with the image of a trident on each side of the cutting head, and a curved swan-like bird neck over the top.

Only five other bronze warship rams have been described since the Belgammel Ram was discovered, so this object is extremely rare and important in what it tells us about ancient warfare and foundry technology. None has been studied in so much detail.

Dr Jon Adams and his colleagues at the University of Southampton’s Department of Archaeology have used advanced laser scanning images to reconstruct a measurable representation that can be studied in a computer in terms of its exact dimensions and its surface texture.

Powerful X-rays shone right through the 10cm thick solid metal of the ram revealed the exact shape of the internal sockets into which the ship’s timbers would have fitted, as well as the inclusions and bubbles inside the metal which formed as the liquid bronze cooled in the sandy-clay mould.

Dr Ian Croudace of the University of Southampton’s School of Ocean and Earth Science (SOES) used high-precision X-Ray fluorescence and scanning electron microscopy to reveal the composition of the bronze alloy. This was found to be made of 87% copper, 7% tin and 6% lead. Croudace and geochemist colleague Dr Rex Taylor (SOES) also measured the ratios of lead isotopes using mass spectrometry to help indicate possible sources of the lead ores.

The Belgammel Ram is in the possession of the Museum of Libya, Tripoli, where a workshop will be held on 26 May 2010.