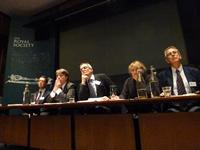 Last month the Royal Society was the venue for a marine themed Question Time discussion session with Prof Nicholas Owens in the Chair. Four brave panellists faced questions from the floor on the subject of sustained marine observations.

The discussion session was part of an event called “A Prospectus for UK Marine Sustained Observations” organised by the Challenger Society for Marine Science and UK Scientific Committee for Oceanic Research (SCOR) at the Royal Society in London. The meeting featured an interdisciplinary series of talks and discussions by some of the UK’s foremost early to mid-career scientists who celebrated the UK’s history of sustained observations of the ocean and reflected on the impact these observations have had on their field of science as well as in other areas.

The presentations generated a great deal of discussion and with the directors of many UK marine science organizations present, the Prospectus provided a genuine opportunity for the marine science community to discuss their ideas for future strategy. The contributions showed how gaps in time-series affect our ability to detect trends, explored different funding models for long observational programmes and discussed how policy makers use sustained observations. Moreover, we heard about the fascinating science being achieved using long-term ocean measurements. Further information can be found at Prospectus 2013.