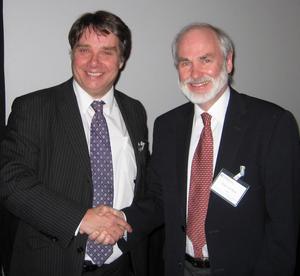 Professor Gwyn Griffiths has been announced as the National Oceanography Centre’s inaugural Chief Technologist. The announcement was made by Director of Science and Technology, Professor Andrew Willmott, at the Directorate’s symposium held in the Midlands in March.

There will only be one NOC Chief Technologist at any one time and the title signals the importance the Centre places on the promotion of NOC’s capabilities in this field to a range of stakeholders, including technology funding bodies, such as the UK research councils and European funding agencies; the marine research community, industry and UK Government departments, notably D-BIS, Defra and DECC.

Currently Head of the Ocean Technology and Engineering Group in the Directorate of Science and technology, Gwyn has been responsible for leading technology and engineering at the Institute of Oceanographic Sciences (IOS), Wormley, the Southampton Oceanography Centre (SOC) and the National Oceanography Centre, Southampton (NOCS). Before that (1989–1993), he worked on the interface between physical oceanographers and ocean instrument developers at the James Rennell Centre for Ocean Circulation, following thirdteen years as a development engineer within the Applied Physics Group of the IOS (1976–1989).

Since October 2000, Gwyn has been part-time Professor of Underwater Systems Engineering within the Fluid Structure Interaction research group in the School of Engineering Sciences at the University of Southampton. Among outside appointments, he has been Vice President and Chairman of Council of the Society for Underwater Technology.

Professor Andrew Willmot, said “Gwyn’s distinguished record of achievement made him an obvious candidate for this key role. As Chief Technologist of NOC he will work with counterparts based in other major marine laboratories around the world on the development of new platforms and instruments, sharing best practice and articulating the importance of marine technology to the knowledge-based economies of the world.”

Gwyn said “I am honoured to be named as the National Oceanography Centre’s first Chief Technologist. This new role recognises the importance of technology across the breadth of the Centre’s research activity. I have two aims as Chief Technologist: to increase the impact of the excellent work already being done in technology and second, to lead the dialogue that will result in a new technology programme in a challenging era.”

Gwyn recently received the prestigious President’s Award from the Society for Underwater Technology.