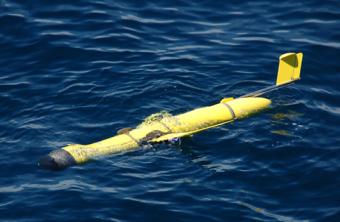 If we can find out why marine snow particles are breaking up, we could improve our prediction of the ocean’s ability to absorb carbon dioxide in the future.

While the cause of this breakage is still unknown, it appears to have an important effect on the carbon dioxide in our atmosphere and our oceans, which could be relevant to our wider understanding of CO2 being absorbed by the oceans.

Marine snow, named after the visual effect of particles falling through the water like snow, can sink to the deep ocean and store carbon there for hundreds of years, or longer. However, scientists have observed that around 70% of the marine snow formed at the surface is lost before it reaches the deep ocean (past around 1km deep.)

Around half of this lost organic matter is consumed by zooplankton and microorganisms, such as bacteria, but the fate of the other half was unclear. It was suspected that this marine snow was fragmenting into smaller particles, which do not sink to the deep ocean, but the difficulty of measuring this fragmentation prevented confirmation.

Robotic ocean profilers, part of the Biogeochemical-Argo programme, were fitted with optical sensors to detect both marine snow and the smaller, non-sinking particles. Twenty-four of these underwater robots moving up and down in the ocean produced thousands of particle measurements, allowing researchers to compare the loss of marine snow particles with the appearance of smaller fragments.

These observations showed that particles were indeed fragmenting at a high rate. In fact, the speed of fragmentation was roughly equal to the previously-measured particle consumption processes. This helps to explain the gap in previous measurements and suggests that fragmentation, a previously unmeasured process, may be the most important process stopping carbon sequestration by marine snow.

There are various possibilities for the causes of this fragmentation, from zooplankton breaking up marine snow faster than they actually consume it – possibly as a strategy to avoid it sinking out of reach – to the marine snow particles being fragile enough to break up without any outside influence.

Future research could address this question, adding to our understanding of the ocean’s carbon dioxide uptake, and potentially improving our ability to predict the future of the ocean’s CO2 absorption.

Lead author, Dr Nathan Briggs of the NOC, said: “Our results indicate that the breakup of marine snow, previously unmeasured in the ocean interior, is happening at fast rate, dramatically slowing their sinking speed. This is preventing many them from reaching the deep ocean, where they would otherwise sequester carbon for hundreds of years, reducing atmospheric CO2.”

Dr Giorgio Dall’Olmo, Earth Observation Scientist at Plymouth Marine Laboratory working with the UK National Centre for Earth Observation (NCEO), said: “We hope that this new result will help other scientists to create more accurate models of uptake of carbon dioxide by the oceans. These novel results demonstrate once again the tremendous potential of the Biogeochemical-Argo programme to observe crucial but unknown oceanic processes. It is clear that by investing in this global array of floats we will reap benefits much more valuable than the initial costs.”

Dr Hervé Claustre, of the Laboratoire d’Océanographie de Villefranche-sur-Mer, added: “If we can find out why marine snow particles are breaking up, this information should improve our prediction of the ocean’s ability to absorb CO2 in the future. The better our atmospheric CO2 predictions, the better we can allocate our resources to mitigate and adapt to resulting changes in our climate.”