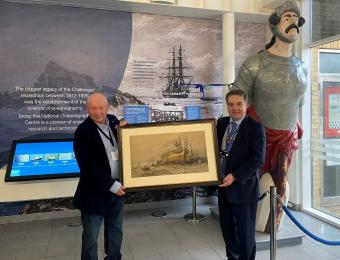 A framed print of a previously unknown detailed watercolour painting of the famous ship, HMS Challenger by George Cochrane Kerr in c1890, was presented to the National Oceanography Centre in Southampton today (Friday 19 November).

The painting was made based on direct observation of the ship alongside at Chatham. HMS Challenger completed a circumnavigation of the globe from 1872 to 1876 covering over 68,000 nautical miles. A collector of historical ship items, Martin Bosher, bought the original painting, at auction, and donated a framed print to the Centre, where there are plans for an exhibition to mark the 150th anniversary of the start of Challenger’s 1,000-day voyage and celebrate the ship’s findings which provided new insights into the biology, geology, physics and chemistry of the ocean.

The last physical remnant of HMS Challenger is its much-restored figurehead located at the National Oceanography Centre in Southampton and also clearly visible in the painting - but the ship’s lasting legacy is the science of Oceanography itself.

Earlier this year, scientists from the NOC revisited and used ocean measurements taken on the research voyage for the first time to learn more about how human activity has impacted climate change and was the first global-scale analysis of salinity from this expedition and the first observational evidence of changes in the global water cycle since the late 19th century.

During his visit to present the print, Martin and his wife, Elisabeth, were able to view original reports from the Challenger expedition, see the Royal Research Ship Discovery alongside at Southampton and learn how the observational reach of modern research ships is being expanded by new autonomous underwater ocean sensing technologies which can take vital ocean measurements all day, every day.

Professor Ed Hill CBE, Chief Executive of the National Oceanography Centre said, “I am delighted to have received the generously donated print of HMS Challenger on behalf of the National Oceanography Centre. Challenger has such a special place in the history of science because its pioneering circumnavigation of the world - the first dedicated to the science of the sea itself - is widely regarded as the foundation of the modern subject of Oceanography. As we approach the 150th anniversary of Challenger setting sail, the importance of ocean science has never been clearer for doing what so typified that expedition - discovering the answers to fundamental questions about the ocean, sea floor and its life combined with addressing very practical issues, which today concern the ocean’s role in managing climate risk, securing clean energy and sustainable food, and increasing the resilience of communities to marine related dangers not least as sea level rises”.