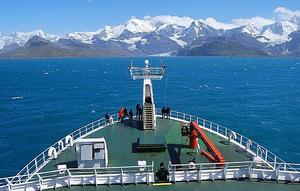 The first study of its kind to quantify the role of the Weddell Gyre in closing the southern limb of the Meridional Overturning Circulation (MOC) has been conducted by an international team led by scientists based at the National Oceanography Centre, Southampton.

Their results, which are published this month in the Journal of Geophysical Research, indicate that the previous consensus view of the gyre as a rotating bowl in which mid-depth water masses sink and outpour into the global ocean abyss may be over-simplistic. The new study reveals that some of the mid-depth waters entering the Weddell Gyre upwell to the ocean surface instead of sinking, and that those mid-depth waters that sink do so at a weaker rate than previously thought. The authors show that a significant fraction of the bottom waters leaving the gyre into the global ocean abyss actually originate in the Indian sector of Antarctica, and that this implies that the gyre’s role in closing the southern limb of the the MOC has been historically overstated.

“These findings have important implications”, says Prof. Alberto Naveira Garabato of the University of Southampton Ocean and Earth Science, Principal Investigator of the project supporting the work.

“They represent a significant shift in how we understand the Southern Ocean’s role in global ocean circulation and its sensitivity to major climatic perturbations. At the most basic level, our results suggest that if the international scientific community is to obtain a balanced view of the Weddell Gyre as a player in contemporary climate change, it cannot focus observational efforts solely on the sites of intense oceanic cooling and bottom water export, as it has largely done to date, but must also capture upwelling areas and the inflows of Indian-sourced bottom waters.”

“This is an important piece of the jigsaw”, says Dr Sheldon Bacon, NOC Principal Scientist of the first of the project’s Southern Ocean research expeditions. “The more we learn about the functioning of this complex system, the better it can be represented in climate models, and this reduces uncertainty in projections of future climate”.

The paper ‘The contribution of the Weddell Gyre to the lower limb of the Global Overturning Circulation’ will feature in Research Spotlight of EOS Transactions, American Geophysical Union.