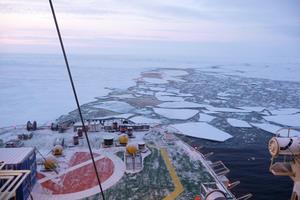 The first study of its kind to calculate the amount of nutrients entering and leaving the Arctic Ocean has been carried out by scientists based at the National Oceanography Centre, Southampton.

Their results, which are published this month in the Journal of Geophysical Research, show that there is a mismatch between what goes into the Arctic Ocean and what comes out.

This is the first study to look at the transport of dissolved inorganic nutrients nitrate, phosphate and silicate together, all of which are essential for life in the ocean. The study combined measurements of nutrient concentrations with measurements of how much water was transported across the main Arctic gateways – Davis Strait, Fram Strait, the Barents Sea Opening and Bering Strait – in summer 2005.

Growth of the tiny plants at the base of marine food chains, microalgae, in the Arctic Ocean is fuelled by nutrient inputs from the Pacific and Atlantic Oceans, and from rivers around the Arctic Ocean rim. These riverine inputs are increasing as a result of increasing temperatures, because nutrients previously locked up in frozen soils – or ‘permafrost’ – are being released as the permafrost thaws.

While scientists are trying to understand how this increase in nutrients is influencing the growth of Arctic microalgae, the final fate of the nutrients is also of interest because they may support marine ecosystems elsewhere, carried there by ocean currents.

In the study, the researchers looked at all oceanic inputs and outputs of the three nutrients. They found that the nitrate coming into the Arctic Ocean balanced how much goes out. But for silicate and phosphate, more goes out into the North Atlantic than comes into the Arctic Ocean.

“These findings have important implications,” says Dr Sinhué Torres-Valdés of the National Oceanography Centre, lead author of the paper.

“Firstly, the imbalances indicate that the Arctic Ocean is an important source of phosphate and silicate to the North Atlantic. Secondly, while nitrate transports are balanced, in the Arctic large amounts of nitrogen are lost to the atmosphere as nitrogen gas through a process called denitrification.”

So where do the extra nutrients come from?

“Data suggest that rivers can provide most of the silicate that is transported to the North Atlantic, which implies that further alterations on Arctic river nutrient loads will have a direct impact on nutrient transports to the Atlantic.

“We suggest that this work can serve as a baseline for monitoring how nutrient availability varies as the Arctic continues to respond to the changing climate,” says Dr Torres-Valdés.

The paper Export of nutrients from the Arctic Ocean was featured in Research Spotlight of EOS Transactions, American Geophysical Union.