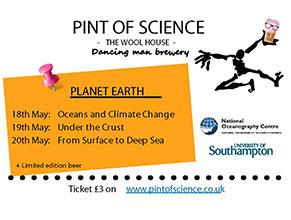 18–20 May 2015 – If you have ever wanted to combine intellectual stimulation, entertainment and freshly brewed beer, then make sure you book a ticket for this year’s international ‘Pint of Science’ festival, which will see NOC scientists delivering lively and interactive talks on oceanography in Southampton’s Dancing man Brewery.

NOC’s Professor Richard Sanders and Dr Elizabeth Kent will take to the stage during this event, which will see over 600 events in 50 cities across eight countries around the world.

Alongside the main talks, each evening will also include a range of fun science related activities including live experiments, quizzes and engaging stories.

Elizabeth will be talking on ‘How we Observe Changes in the Ocean’ on Monday the 18th and Richard will be discussing ‘Oceans – the Small Stuff’ on Wednesday the 20th, both of which will focus on the stories in oceanography that are not often told in the popular media.

Each evening costs only £3, and will be taking place between 18th and 20th May. Doors open at 6.30 pm, children and under-18s welcome. For more details and tickets go to: http://pintofscience.co.uk/events/southampton