Picturing the Deep – seeing climate change on the ocean floor 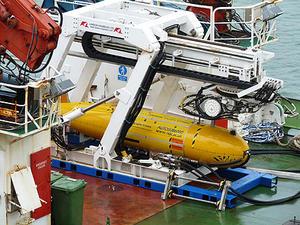 NOC scientist, Dr Henry Ruhl, is leading an expedition to the Porcupine Abyssal Plain, some 300 miles southwest of Lands End. He will be looking at how the shape of deep ocean floor and climate influence deep sea ecology, and he intends to do this by making a very large photographic map of the seafloor – 10km by 10km – an area roughly the size of Southampton.

Much like the ecology of a field might be fairly similar to a neighbouring field, but different to a nearby hilltop, the team will be able to find out the scales at which deep sea communities transition from being similar to being different. In addition to the cameras, Autosub6000 has a suite of instruments that can collect fine-scale bathymetric data that gives the shape of the seafloor; mapping acoustics that will reveal the composition of the seafloor – mud, rock, sand; and environmental sensors that measure temperature and the amount of particles in the water. But it is the cameras that will show what animals are living there. While Autosub6000 is gathering this data, the scientists will be free to take mud core samples to find out what is living in the seafloor. The cores will confirm variation in sediment type as well as collecting microscopic worms and bacteria.

During the expedition the researchers are sending back daily blogs about their work on board RRS Discovery: http://picturingthedeep.blogspot.co.uk.

The UK Marine Environmental Mapping Programme is a collaboration between NOC, SAMS and BGS to improve coordination of mapping effort, driven by the need for good environmental data for UK seas (www.maremap.ac.uk).