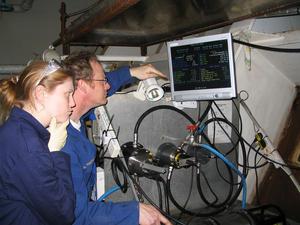 For most of us, ferries are simply a convenient means of getting from A to B on a short break or family holiday, but for scientists at the National Oceanography Centre, they have proved to be an invaluable source of information about harmful phytoplankton growth in the English Channel.

Passengers travelling from Portsmouth aboard P&O’s Pride of Bilbao may well have been unaware that while it was transporting them to their Spanish destination and back, it was also acting as a ‘Ship Of Opportunity’ (SOO), making valuable measurements of the water using specialist equipment called a Ferrybox. The Ferrybox sampled the sea water continuously throughout the ship’s twice-weekly journey over an eight-year period and most months scientists were able to collect additional water samples, which provided information for a range of scientific studies.

For scientists at NOC studying the growth of harmful algal blooms (HAB), the water samples offered new insights into the physical factors that cause harmful algae to grow and develop further out in the English Channel. There is a gap in knowledge about mid-channel blooms, as it is a much more difficult area to monitor than coastal waters. Until recently, remote-sensing satellite images have been the primary source of information. However, the in-situ water samples collected, together with the continuous Ferrybox measurements, enabled more accurate scientific data to be established about the different species of algae and the specific conditions that may have caused them to grow.

In a study published in the Journal Marine Systems, the team at NOC, led by Susan Hartman and Mark Hartman, analysed meteorological and tidal conditions, water temperature and salinity in the English Channel and looked at these specifically in relation to the Karenia mikimotoi algal mid-channel bloom in the summer of 2010. This strain of algae can be lethal for fish, killing them in their masses by taking oxygen from the water that they need to survive. Also known as a ‘red tide’ due to its distinctive colour, this harmful algae first appeared in UK waters in the 1970s and seems to be becoming more prevalent.

The regular in-situ water samples collected between 2002 and 2010 have provided valuable new information which could help predict future blooms. Analysis showed that the Karenia mikimotoi bloom in 2010 started earlier than had previously been thought and followed an increase in sea surface temperature. This type and size of HAB had last been seen in 2003, which could be compared and analysed.

Speaking about the study, Susan Hartman said: “The time-lapse sampling from the Ferryboxes has been key to our studies of the HABs that form further away from the shores of the English Channel. The Pride of Bilbao is no longer in operation but we are looking at new opportunities for Ferryboxes as we believe that the data collected in this manner is invaluable for use in models predicting growth trends for future red tides and other harmful algae, providing vital information for the fishing and associated industries”.

The paper ‘The role of hydrographic parameters, measured from a ship of opportunity, in bloom formation of Karenia mikimotoi in the English Channel’ can be read in full here.