Omega-3 is vital for a healthy ocean 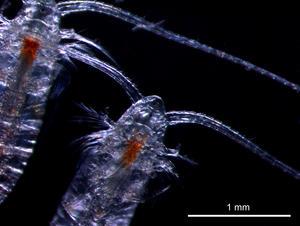 A new study published this week in Nature Scientific Reports reveals the importance of omega-3 fatty acids for the health of the ocean.

This research shows that ‘ocean-fleas’ play a vital role in maintaining a healthy ocean depend on omega-3 to survive. These 2-mm long creatures, called copepods, are distant relatives of crabs and lobsters and rank amongst the most abundant animals on our planet. They get omega-3 from eating microscopic plants in the sea that absorb carbon from the atmosphere. This carbon then gets transported into the deep sea by sinking copepod poo, stopping it returning to the atmosphere. Copepods are also a key source of food for fish larvae, therefore an abundance of copepods results in lots of fish as well as an ocean better able to remove carbon from the atmosphere.

Although copepods are relatively well studied, little is known about how they will respond to future environmental change. The lead author of this study, Dr Daniel Mayor from the National Oceanography Centre (NOC), said “Copepods are in many ways analogous to wildebeest on the plains of Africa. They undertake a spectacular annual migration, descending over 1 km into the deep ocean to spend winter in a state of suspended animation after fattening up in spring. This is equivalent to you having to walk 875km before being allowed to sleep off your Sunday roast.

“We don’t fully understand why copepods are so dependent on omega-3 but our study shows that these compounds underpin the health of the ocean.”

The tiny plants that copepods eat, called diatoms, ‘bloom’ in the spring. It is thought that since the start of the diatom bloom is controlled by day length, whereas copepod growth is controlled by water temperature, global warming will increasingly separate copepods from their source of omega-3.

The study exposed food-deprived copepods to predicted climate change scenarios and measured their response using a new technique called ‘metabolomics' that simultaneously determines how animals process fats, sugars and proteins. Dr Ulf Sommer, co-author of the study from the University of Birmingham, explained “Metabolomics is a powerful tool for simultaneously looking at all of the biochemical reactions going on within an organism. We’re now able to peer into the inner workings of life and are discovering new and exciting molecules in the process.”

This research was funded by the Natural Environmental Research Council (NERC) and involved collaboration between the NOC, the Universities of Aberdeen and Birmingham, and Marine Scotland Science. It forms part of the NOC’s ongoing research into the relationship between the atmosphere and the ocean.