Ocean science high on the agenda for Commonwealth leaders 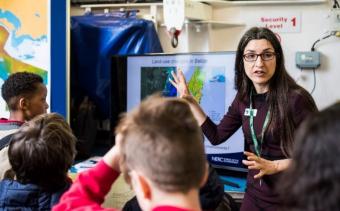 The NOC has this month been at the centre of a number of high profile government announcements regarding the future management and protection of the ocean.

On Thursday during the Commonwealth Heads of Government Meeting, in London, Foreign Secretary, Boris Johnson, announced via the Government website, the commitment of £9 million to protect the marine environment and drive economic development in Commonwealth small island states (SIDS).

This is the third year of funding for the Commonwealth Marine Economies Programme, a joint initiative between the NOC, Cefas and the UK Hydrographic Office. The programme was the subject of a showcase on board the Cefas research vessel, RV Cefas Endeavour, on Tuesday and Wednesday, attended by Lord Ahmad of Wimbledon, Minister of State for Commonwealth & UN and the Rt Hon David Lidington CBE MP. The event also saw children from local schools visiting the vessel and talking to scientists and crew.

On Wednesday evening, NOC attended a celebration of commonwealth science, research and innovation collaboration at the Royal Society, hosted by Sam Gyimah MP, Minister of State for Universities, Science, Research and Innovation.

Last week the NOC in Southampton hosted a celebration of marine science on behalf of Environment Minister, Thérèse Coffey, who announced that the UK has joined the Coral Reef Life Declaration, committing to safeguard coral reefs and bolster scientific research into the threats they face. The event was attended by High Commissioners from across the Commonwealth.