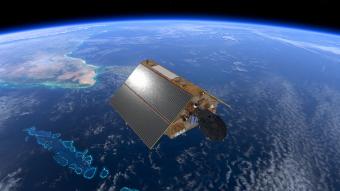 A satellite that will allow UK scientists to measure sea level rise, one of the biggest threats posed by climate change, launched on a SpaceX rocket today from Vandenberg, California.

Thanks to funding from the UK Space Agency, experts across the UK’s ocean and climate community, including the National Oceanography Centre and Met Office, will be at the forefront of analysing the most accurate data yet on sea levels and sea state, and how our oceans are changing in response to climate change.

Over the past three decades satellite observations have revolutionised our understanding of the ocean and climate change. They allow us to monitor the global ocean day after day, year after year with a level of detail that cannot be obtained in any other way. Satellites are indispensable for collecting data on sea level, seeing an average rise of over 3 mm each year since 1993 and this appears to be accelerating.

Sea level rise is one of the biggest challenges facing people in relation to the ocean, with 600 million people living in coastal communities at risk. It is vital then that there are sustained observations of the ocean in order to understand how climate change is reshaping sea level and the Earth's coastlines and how fast this is happening.

The Sentinel-6 satellite, which is the size of a small car and will orbit around the Earth 830 miles above the planet, will collect data that is indispensable for weather forecasting and climate models over the next decade. It will carry an improved instrumental capability that will deliver better precision, finer spatial resolution and greater data recovery in coastal and ice-covered regions.

The NOC has been at the forefront of satellite oceanography since the early Cryosat-2 and Sentinel-3 Surface Topography Mission, where we were amongst the first to demonstrate the improved performance of Synthetic Aperture Radar altimetry for oceanography and coastal research. Our pioneering research will use Sentinel-6 data to study regional and coastal changes in sea level and sea state which are a major threat to coastal communities, infrastructure, natural habitats and freshwater reservoirs.

Prof. Christine Gommenginger, Principal Scientist of NOC Satellite Oceanography, said, “In many parts of the world, rapid changes in coastal sea level and sea state are endangering the lives and livelihood of millions of people who live within a few meters of mean sea level: This stark reality is a key motivation of all our research at the NOC. New data from Sentinel-6 will benefit our ongoing research into quantifying and understanding the drivers of variability, trends and acceleration in coastal sea level and ocean surface waves. New discoveries about these complex interactions and exchanges could hold the key to significantly broaden the understanding of the ocean and climate by researchers and stakeholders. Sentinel-6 will sustain expert research and give new insights to UK and international decision makers, and to the public, for the benefit of all. We welcome the launch of Sentinel-6 satellite and congratulate everyone involved.”

Sentinel-6 is part of the European Copernicus Programme, which has revolutionised understanding of the critical role the ocean plays in climate and in ocean-atmosphere interactions which produce extreme weather events and flooding.