Ocean could hold the key to predicting recurring extreme winters 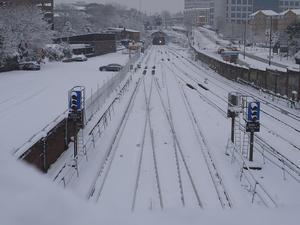 Research at the National Oceanography Centre (NOC) may help to predict extreme winters across Europe by identifying the set of environmental conditions that are associated with pairs of severe winters across consecutive years.

Pairs of extreme winters in Europe have been found to coincide with high pressure over the Arctic and a band of low pressure immediately to the south, a set of atmospheric conditions known as a negative Arctic Oscillation. This study, published in Climate Dynamics, suggests that the ocean plays a role in preserving these atmospheric conditions over the North Atlantic, which allows extreme winters to reappear the following year.

During the recent severe winters of 2009 and 2010 scientists from the NOC also measured strong reductions in the strength of the Atlantic meridional overturning circulation (AMOC), which is a ‘conveyor’ of water that transports heat towards Northwest Europe. This transfer of heat contributes to the milder winters experienced in this part of Europe than at similar latitudes in Western Canada.

Dr Adam Blaker said “Ocean surface temperature anomalies can affect the atmospheric conditions. The ocean can store these anomalies by trapping them beneath the ocean surface during the summer and mixing them back to the surface the following winter, providing a seasonal ‘memory’. Our research could help predict when these pairs of severe winters will occur in the future”.

Dr Adam Blaker, alongside colleagues from the NOC and University of Southampton, examined temperature and atmospheric pressure records together with computer simulations of the ocean. They found that three times in the past fifty years, pairs of severe winters have coincided with strong reductions in the AMOC.

This research was funded by NERC through the RAPID-Watch programme and National Capability funding.