Ocean acidification in the Southern Ocean 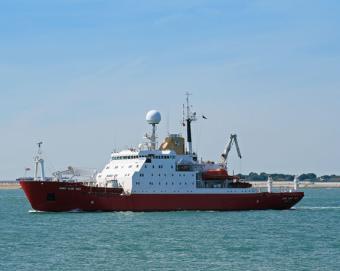 An expedition to the icy waters of Antarctica has begun aboard the RRS James Clark Ross. The five-week mission will study the effect of ocean acidification in the Southern Ocean.

During the expedition, scientists will study the impact of the changing chemistry on marine organisms and ecosystems, on the cycling of carbon and nutrients in the sea and on how the sea interacts with the atmosphere to influence climate. This study is part of the UK Ocean Acidification research programme (UKOA).

Dr Geraint Tarling, from the British Antarctic Survey is leading the team of thirty scientists. He said “This is the most comprehensive investigation into the response of the Southern Ocean ecosystem to ocean acidification yet mounted. The team will not only look at how different parts of the ecosystem respond in isolation but also see how effects interact to produce an ecosystem-level response.”

The global ocean is an integral part of the climate system. By absorbing large amounts of the carbon dioxide (CO2), mostly produced as result of the use of fossil fuels, the ocean helps to slow the rate and severity of climate change. The global ocean has absorbed more than 30% of the total CO2 produced by human activities in the past 200 years. While this can be seen as a benefit, the down side is that as the ocean absorbs more and more CO2 its chemistry changes and the seawater moves down the pH scale towards acidity. This process is known as ocean acidification.

Cold waters naturally hold more CO2 than warmer waters so the icy Southern Ocean is expected to be especially informative for studying the effects of ocean acidification. Additionally, deep-water upwelling around Antarctica brings water to the surface that already contains very high levels of CO2. For these reasons, the waters of the Southern Ocean are likely to provide a unique window into how the marine environment will respond to higher CO2 levels in the future. This expedition will include a visit to the Weddell Sea, which has some of the coldest surface waters (&minus1.8⁰C) anywhere in the world.

Professor Toby Tyrrell from the National Oceanography Centre and coordinator of the UKOA Sea Surface Consortium added “Another reason for visiting the Southern Ocean is that it is also an unusually stable environment, with surprisingly little seasonal variation. The sea remains extremely cold even in summer. As the local organisms are not exposed to much natural variation, they could be more susceptible to human-induced variations. It is important for us to find out whether this supposition is correct.”

Firstly, the researchers will look at how ecosystems vary between locations where the chemistry of seawater is naturally more acidic and those where it is more alkaline. This approach will provide insights on how acidification may affect organisms living in their natural environment, where natural selection and adaptation have had time to play out.

A second approach is experimental, using tanks of natural seawater collected from the upper ocean and brought into controlled conditions on deck. This natural seawater will be subjected to various levels of carbon dioxide that are likely to occur in the future.