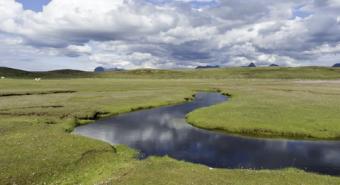 The report entitled ‘Blue Carbon Habitat Restoration in NI Feasibility Study’, developed in partnership with the National Oceanography Centre and the University of Hull, identifies what, where, and how much local coastal marine habitats, such as kelp forests, saltmarsh, seagrass meadows and shellfish, can remove and store carbon dioxide from the atmosphere – these habitats are known as ‘blue carbon’.

Dr Annika Clements, Director of Nature, Climate and Environment, at Ulster Wildlife says, "The role of woodlands and peatlands in carbon sequestration has been well known for some time, but marine equivalents have often been overlooked, despite the oceans absorbing nearly a third of CO2 emissions that human activity generates each year. This report is the first step in Northern Ireland recognising the potential of coastal blue carbon habitats to lock away carbon, particularly within our Marine Protected Area network, but only when they are well managed and healthy.

‘We’re now calling on the Government to invest in, develop and implement a cross-cutting Blue Carbon Strategy, integrating blue carbon protection and recovery into climate change mitigation and adaptation, as part of a wider approach to meet net zero targets.  This would be a win-win for tackling both the climate and biodiversity crises, helping to bring our precious seas back to life.”

Lead author of the report, Dr James Strong, of the National Oceanography Centre, says, "This study contributes significantly to our understanding of the value of marine habitats, for locking away carbon, and helping in the fight against climate change. The modelling of the distribution of these habitats provides fundamental information on the ‘what, where, and how much’ for blue carbon in Northern Ireland. The same information also allows us where multiple habitats overlap and potentially generate hotspots of blue carbon value.

“Finally, the identification of areas suitable for the establishment of blue carbon habitats paves the way for actively creating and restoring habitats in currently unoccupied areas, thereby increasing biodiversity, the potential for carbon sequestration, and a host of other ecosystem services that indirectly support mankind.”

From planting seagrass meadows in Wales to saltmarsh realignment in England and native oyster restoration in Scotland, the report highlights some of the innovative restoration projects taking place across the UK and Ireland that are making a real difference for coastal and marine biodiversity and carbon capture.

The report was funded by the DAERA Challenge Fund. To find out more and download the report visit www.ulsterwildlife.org/blue-carbon