NOC’s response to the recent hurricanes and storm surges 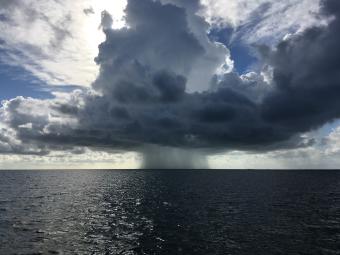 Talking to the BBC about the recent hurricanes, NOC’s Professor Judith Wolf, said “This year’s hurricane season is worse than usual, at least the worst since 2005 when hurricane Katrina hit New Orleans. We cannot attribute this directly to climate change – there are large changes in the number and severity of storms from year to year.

“However, hurricanes are driven by heat from the ocean surface, and the temperature of the North Atlantic this year seems to be higher than usual. This can, at least partially, account for the severity of this hurricane season and may increase storm intensity, as well as sea-level rise exacerbating the coastal flooding caused by storm surges and waves.”

The NOC’s Dr David Smeed added “Since the mid 1990s the occurrence of hurricanes has increased compared with the 1970s and 80s. This change has been linked to a cycle of Atlantic sea-surface temperatures known as the Atlantic multi-decadal oscillation (AMO), which is mainly controlled by the northward transport of heat by ocean currents. However, recently an array of instruments, known as the RAPID array, have measured a reduction in the northward transport of heat, which would impact the AMO and may lead to a reduction of hurricanes in the future.

Since 2004 the National Oceanography Centre have been monitoring this transport of heat using the RAPID array, which stretches across the Atlantic from Florida to the coast of Africa. As our understanding of the complex Atlantic climate system develops it is hoped that the measurements from the RAPID array will provide clues about the likelihood of hurricanes in future years.”

Last week (11–15 September) Professors Kevin Horsburgh and Judith Wolf, from the NOC, made the following statement about hurricanes Harvey and Irma; “Hurricane Irma is the strongest storm in the region for over ten years. Two weeks ago this hurricane brought life-threatening wind, storm surge, and rainfall hazards to many islands of the Caribbean. The eyewall of the hurricane moved over Barbuda near its record peak intensity during the night of 5–6 September. Sadly, over 30 people lost their lives.

“Hurricane Irma is now battering the coastline of Florida where six million people have been advised to leave their homes. Coastal flooding and wave impacts caused by hurricanes and tropical cyclones all around the world have profound social and economic impacts for coastal communities. This underlies the value of constantly improving coastal flood forecasting across the world, which is one of the aims of this week’s 1st international workshop on waves, storm surges and coastal hazards.

“Two weeks ago, Hurricane Harvey caused major flooding in Houston, Texas, but it was unusual in that most of the flooding was due to rainfall rather than the coastal storm surge. The storm surge itself was not very extreme and reached its maximum of about seven feet at Port Lavaca, although this was the largest at that tide gauge since 1961. Hurricane Harvey was also unusual in remaining almost stationary in the area for several days. Right now, a new storm – Hurricane José with wind speeds over 200 km per hour is making its way across the same Caribbean region already devastated by Irma.

Whereas specific hurricanes are not caused by climate change, they may be worsened by the higher surface heat content in the tropics, which provides the driving force for hurricanes. Another aspect of this year’s hurricane season to note is that it started earlier than usual, with Hurricane Arlene in April as opposed to early June.”

Opening last week’s 1st international workshop on waves, storm surges and coastal hazards, Professor Ed Hill, executive director of the NOC, said “As our thoughts turn to all those affected by the power of nature and flooding from the sea, there is no more fitting service we can provide than to re-double our efforts working to achieve the very best scientifically based forecasting systems for waves, storm surges and coastal hazards, which can have such devastating impacts on lives, livelihoods, property and economic infrastructure.”