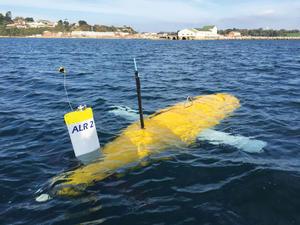 In March 2016 the Natural Environment Research Council launched a campaign to find a name for the UK’s next world-class polar research ship.

One suggestion in particular captured the nation’s imagination and #BoatyMcBoatface was soon trending on Twitter and being talked about all over the world! The ship was named another popular choice, RRS Sir David Attenborough, but the popularity of ‘Boaty’ could not be ignored, and so one of the National Oceanography Centre’s Autosub Long Range autonomous vehicles now proudly carries the name.

Boaty’s adventures will help tell the story of ocean exploration to a whole new audience, and a full sized inflatable and the cartoon likeness will travel to events across the country.

Boaty, and two other Autosub Long Range vehicles have been developed at the NOC and are able to travel thousands of kilometres on missions lasting several months at a time. The ability to travel under ice and reach depths of 6000 metres will enable Boaty and friends to explore 95% of the ocean. Boaty and similar autonomous vehicles will help oceanographers investigate the processes driving change in the Polar Regions, including the extent of the ice melt, and conduct a range of research in the Arctic and Antarctic oceans without the need for the constant presence of a research ship. Scientists won’t need to wait to get access to the data, since Boaty will periodically surface and transmit the data back via a radio link.

The marine robot fleet at NOC is one of the most capable in the world, and by working with government and industry partners we are able to translate this capability into more cost-effective and environmentally-friendly marine observing, while also supporting regional and national growth in this rapidly growing sector.

In March next year Boaty McBoatface will be ‘flying’ through a deep current in the Southern Ocean that originates in Antarctica, as part of the DynOPO project. Boaty will collect data on the speed of the Antarctic Bottom Water flow, as well as the level of turbulence within the submarine waterfalls and rapids it travels through. These data will be sent onto scientists via radio-link in order to help them understand the influence these features have on mixing between different layers of the Southern Ocean, which will shed light on how the ocean is responding to global warming. Antarctic Bottom Water fills in the abyss of most of the world ocean’s basins, so understanding how it traps and releases heat is vital to determine how global climate will change.

Professor Alberto Naveira-Garabato, from the University of Southampton, who is leading the DynOPO project, said “Autosub Long Range is much better equipped for this task than ship-based instrumentation, because it can follow the pathway of Antarctic Bottom Water away from Antarctica while it directly measures how quickly the water flows and how rapidly it mixes.” Later on in 2017 Boaty McBoatface will be fitted with acoustic and chemical sensors and sent into the North Sea to ‘sniff-out’ signals associated with the artificial release of gas beneath the seabed. Led by the NOC, this will form part of the world’s first ‘real world’ deep-water controlled experiment to simulate any release that may be a result of leakage from a carbon capture and storage reservoir; the STEMM-CCS project will aim to further verify the safety of offshore carbon dioxide capture and storage, which will help mitigate global climate change.

A future aim for Boaty McBoatface will be to attempt the first-ever crossing of the Arctic Ocean under ice, which will provide a major technical challenge but has the potential to deliver a step-change in scientists’ ability to observe change in this vital region.

Boaty will also be part of the ‘Polar Explorer Programme’ which will provide a package of online resources, such as videos and images for teachers at low attaining primary and secondary schools. The suite of resources will help increase engagement, achievement and literacy in STEM (science, technology, engineering and mathematics) subjects amongst students. The material will also be available for the public.

The educational support will be available for teachers from March 2017 at 100 schools, and will be gradually rolled out to a further 400 schools by January 2019, running over the next four years.