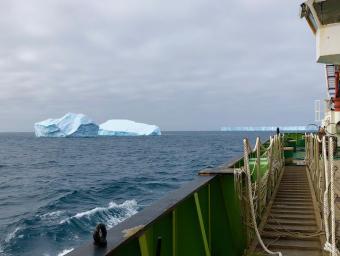 Tipping points in the Earth system are a potential consequence of climate change and are of great concern and whilst they can occur in marine ecosystems, little is known about what they might look like, and when and why they might happen.

Scientists used the Massachusetts Institute of Technology Darwin Model, a state-of-the-art computer model suited to investigate future tipping points in marine ecosystems – in particular, in plankton, which play crucial roles in global climate and the carbon cycle. By using combination of the computer model and mathematical analysis, scientists were able to investigate tipping points in marine ecosystems, a first for the science community. Scientists at the NOC found that tipping points are predicted to occur in marine ecosystems, particularly in the subtropics and in fast-growing plankton types like diatoms. Phytoplankton with unique resource needs, especially fast-growing species such as diatoms, are more prone to abrupt shifts.

Abrupt shifts in biomass, productivity and community structure are concentrated in Atlantic and Pacific subtropics. Abrupt changes in environmental variables such as temperature and nutrients rarely precede these ecosystem shifts, indicating that rapid community restructuring can occur in response to gradual environmental changes, particularly in nutrient supply rate ratios.

Dr Cael, Senior Research Scientist from the National Oceanography Centre, commented: “Marine microbial communities will change with the climate, interrupting how they sustain ocean food webs and mediate global elemental cycles. These changes can be gradual or foreseeable but likely have much more substantial consequences when sudden and unpredictable.

“This is an important example of how human activity can affect the Earth in big and unpredictable ways, and we hope this will help inform climate policies as to the risks of future climate change.”