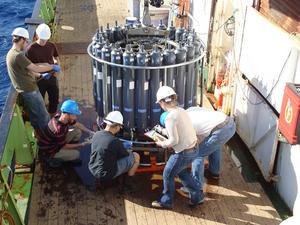 We are delighted to participate in these programmes. We have a strong track record of doctoral training at NOC and will be providing this next generation of scientists access to world class marine facilities and expertise.

The National Oceanography Centre is participating in a major Natural Environment Research Council (NERC) training initiative announced by the Minister for Universities and Science, David Willetts.

DTPs will offer postgraduate studentships and training across the full range of NERC’s disciplines, and in multidisciplinary environments, helping to enrich the student experience. Each DTP will create a strong and active community of students that are able – and encouraged – to integrate, work, and learn together. These students will receive in-depth, advanced research training, as well as training in the professional and transferable skills essential in today’s economy.

Professor Ed Hill, Executive Director of the National Oceanography Centre said, “We are delighted to participate in these programmes. We have a strong track record of doctoral training at NOC and will be providing this next generation of scientists access to world class marine facilities and expertise.”

SPITFIRE builds on the Graduate School of the National Oceanography Centre, Southampton and will establish an innovative multidisciplinary training environment for the next generation of leaders in the environmental sciences.

Professor Damon Teagle, Director of Research for Ocean and Earth Science at the University of Southampton and one of the architects of SPITFIRE, said “In designing SPITFIRE, we thought deeply about providing the skills and knowledge that will be essential for the environmental science leaders of the mid-21st Century, be they engaged in research, industry or policy. New technology, such as next generation sequencing, autonomous vehicles and sensors, and the vast data sets they produce are rapidly changing the way that we investigate our planet exposing previously unknown links between different parts of the Earth system.”

Training the Next Generation of Environmental Scientists, led by the Universities of Liverpool and Manchester will create 12 annual PhD studentships over five years, a total of 60 students.

Professor Ric Williams from the University of Liverpool’s School of Environment said “The award recognises the research strengths in NERC science at Liverpool, occurring both within the University and the National Oceanography Centre, coupled with the complementary expertise provided by our partners at nearby universities. This funding will allow us to train over 100 new researchers with input from a wide variety of world-leading academics here at Liverpool.”

NOC is also participating in other DTP programmes led by Imperial College, London, and the Universities of Durham, Oxford and Lancaster.

Science and Universities Minister David Willetts said “This significant investment highlights the Government’s commitment to supporting postgraduate training and research in the environmental sciences. We're dedicated to providing the next generation of environmental researchers with the necessary skills and training to succeed in academia and industry.

“The strong support for this programme from a number of international partners such as BP, Microsoft and Arup is enormously encouraging. Not only will this initiative benefit students, UK research organisations, business, industry and the economy, it will keep us at the forefront of the global science race.”

The DTPs will support 1200 PhD students across the fifteen partnerships. This means at least 240 new students will begin training every year for five years, with the opportunity for partners to co-fund, boosting the number of studentships available.

An integral element of the NERC DTP programme is that a minimum of 30% (or 360) of the students will work with and undertake research projects that are directly relevant to non-academic partners. This will help keep the UK at the forefront of research training, and provide students with the training experience they need to enter a wide range of careers.