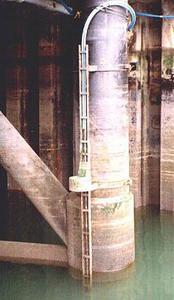 The contract to inspect and maintain the United Kingdom’s network of tidal gauges – the country’s early warning system for coastal flooding – has been won by the National Oceanography Centre.

The contract, worth £1,080,000 over four years, was awarded by the UK’s Environment Agency.

NOC’s Liverpool-based Tide Gauge Inspectorate, part of the National Tidal and Sea Level Facility (NTSLF) is responsible for maintaining and modernising the national tidal gauge network, which uses telemetry to provide warnings of possible flooding in coastal locations around the British Isles.

The network also generates data for a range of end users, including the Met Office which uses them to underpin its Storm Tide Forecasting Service. These data are also used by researchers in scientific studies of coastal processes, such as tidal response, storm surge behaviour and sea level rise.

The need for a national network of sea level gauges was recognised in 1953 after violent storms in the North Sea led to major flooding in the Thames Estuary. The NTSLF was set up in 2002 in recognition of the importance – to coastal communities and policy makers, as well as to the scientists – of national sea level monitoring. The NTSLF also monitors vertical land movements and operates tidal gauges in Gibraltar and British territories in the South Atlantic.

NTSLF Director, Kevin Horsburgh, said “We are delighted that the Environment Agency is continuing to put its faith in NOC’s expertise and proven ability to deliver this essential service to the UK Government, coastal communities and researchers.”