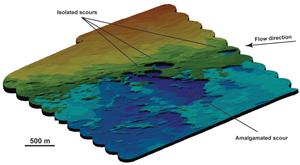 Researchers from the Marine Geoscience group at the National Oceanography Centre (NOC) featured prominently at a recent conference held at the Geological Society in London, focused on submarine canyons and channels

Dr Russell Wynn, Head of Marine Geoscience, provided the opening keynote address on the study of modern channel systems. Some of these systems have only recently been discovered, e.g., the 450-kilometre-long Cape Timiris Channel off the Sahara Desert.

Modern channels are conduits for powerful sediment-laden flows that transport large volumes of sediment (and associated nutrients, pollutants and organic carbon) to the deep ocean. These flows can be a hazard to seafloor infrastructure such as oil/gas pipelines and telecommunications cables, and their sandy deposits have potential to form economically important hydrocarbon reservoirs.

Submarine canyons and channels are also increasingly recognised as biodiversity hotspots, providing a safe refuge from deep-sea trawling. Russell stressed the importance of new technologies for detailed mapping of canyons and channels, and showed a number of high-resolution multibeam bathymetry images obtained during a research cruise aboard the RRS James Cook with NOC’s Autosub6000 deep-water autonomous underwater vehicle. These images are included in a research paper on giant seafloor scours in canyons and channels that will be published this summer.

Russell has also recently secured a grant in partnership with IFM-GEOMAR at the University of Kiel, Germany, to study the initiation of landslides and sediment flows in one of the World’s largest submarine canyons offshore Morocco. This study will be based around a research cruise in early 2013.

At the same meeting, Dr Peter Talling, leader of the Marine Geohazards and Sedimentology sub-group at NOC, gave a presentation discussing future priorities for submarine channel research. He stressed the importance of obtaining more measurements from real submarine flows, for example, by reconstructing velocities of powerful earthquake- and typhoon-generated flows offshore Taiwan, which have sequentially broken submarine cables.

Peter has recently secured a lucrative Royal Society Industry Fellowship, allowing him to work with the International Cable Protection Committee on the hazards posed to seafloor cables (and the global internet network) by these channelised submarine flows. He has also won a Natural Environment Research Council (NERC) grant to develop a deep-water vibrocorer for remotely operated vehicle Isis, which will allow sampling of sandy flow deposits in canyons and channels. This will provide important data to understand flow processes and will be of major interest to the oil and gas sector, which requires modern analogue data to better understand hydrocarbon reservoirs in the deep subsurface.