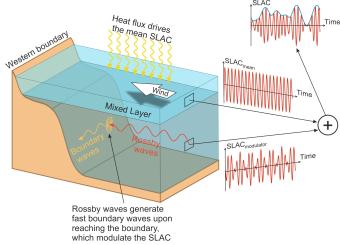 A new link between processes in the open ocean and coastal sea-level has been revealed in a Nature Communications paper, published today by scientists at the National Oceanography Centre (NOC).

The study found that fluctuations in the sea-level annual cycle along the Gulf and Southeast coasts of the US are linked to large-scale Rossby waves generated in the Atlantic Ocean. These waves travel very slowly through the ocean, averaging just 0.15 km/hr, so their effects on the coast are felt months or even years after they are formed in the ocean interior. When combined with spring tides they can lead to widespread coastal flooding, even during benign ‘clear-sky’ weather conditions.

An improved understanding of this delayed coastal response may enable improved seasonal forecasts of water levels in coastal areas, which could help coastal managers and communities better assess and mitigate flood risks. For example, in a year where there is a large sea-level annual cycle, there would be more severe flooding in the event of a storm surge or extreme tides.

Lead author, Dr Francisco Calafat, from the NOC said “This finding is significant because it helps explain some of the physical processes that cause coastal flooding, and that helps us to predict the impacts better. I hope some of my future work may involve using this knowledge to improve seasonal forecasting of coastal flooding events along the east coast of the US.”

This discovery was made by using a new statistical method developed by the NOC and applied to data from tide gauges, which are managed by the Permanent Service for Mean Sea Level (PSMSL). State-of-the-art ocean models were used in combination with simple analytical models to reveal the role of Rossby waves as a modulator of the sea-level annual cycle.

This research was undertaken in partnership with University of Central Florida, US, University of Uppsala, Sweden, and University of Southampton, UK. It was supported by Natural Environmental Research Council (NERC) National Capability funding, and forms part of the NOC’s ongoing research into coastal flooding.