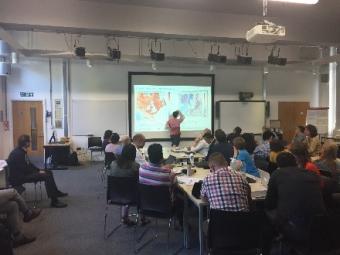 The UKEP coupled modelling system aims to capture at high-resolution the complex interactions between different climate system components, including waves, ocean, atmosphere, land surface and biogeochemistry. The model is being developed with a view to improving the accuracy of environmental predictions, such as extremes water levels, and coastal flooding. The aims of the workshop were to demonstrate the skills of coupled prediction tools through evaluation experiments;identify and discuss gaps in scientific knowledge, modelling and observation capabilities, and develop cross-disciplinary collaborations.

NOC scientist and member of the co-ordinating group, Dr Nicolas Bruneau, said “From a co-organiser’s point of view, the workshop was a real success. It was great to see our community networking and gathering together ideas for concrete applications of the UKEP coupled system in order to resolve scientific challenges.”

Dr Lucy Bricheno from the NOC, said “The discussions were brilliant, and I feel like the groups were coming up with some great ideas for concrete projects.”

Project proposals were developed by the group in three priority areas:
Estuarine and coastal environments, including work to better simulate and assess the transport and evolution of pollutants from land to ocean, and to represent the highly detailed estuary and coastline geographies better within modelling systems.
Regional coupled prediction for environmental change, including work to characterise the impact of representing the interactions between atmosphere, land and oceans on the present-day climate in the UK and in other regions such as south-east Asia where air-sea interactions are known to be important.
Concurrent and combined natural hazards, including work to assess the vulnerability of regions in the UK to worse-case scenarios, in which multiple natural hazards combine and potentially interact. For example, when strong storms, large waves, high tides, high river flows and saturated land occur at the same time.

The UK Environmental Prediction initiative is a national collaboration led by the Met Office in collaboration with the NOC, the Centre for Ecology and Hydrology, and Plymouth Marine Laboratory. It continues to develop and evaluate the UK’s first fully coupled regional prediction system at kilometre scale, encompassing the atmosphere, ocean, wave, land surface and biogeochemistry. The model system is currently being applied across the North West European Continental Shelf region, and has formed the basis for regional coupled systems being set-up for research in other regions, such as the Bay of Bengal and south-east Asia.