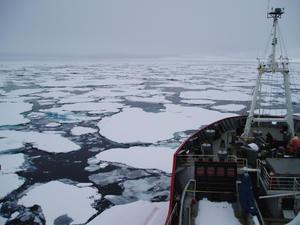 Dr Kevin Horsburgh and Prof. John Huthnance of the National Oceanography Centre (NOC) are among the organizers of an ongoing programme of workshops and conferences being held at the Isaac Newton Institute for Mathematical Sciences (INI) in Cambridge entitled ‘Mathematical and Statistical Approaches to Climate Modelling and Prediction’ (11 August – 22 December 2010).

A connected public meeting will be held on Wednesday 24 November in London.

The INI programme is a prestigious gathering of some of the world’s top climate scientists, including climate modellers, mathematicians and statisticians, who have been in Cambridge to discuss major issues facing climate prediction.

“Most scientists agree that emissions of greenhouse gases as a result of human activities contribute to global warming, the consequences of which could be profound,” said Huthnance.

Scientists have an increasing appreciation of how climate has changed in the past and the factors underlying those changes. However, estimates of future climate are necessarily largely based on simulations, run for decades or even hundreds of years, using complex computer models of how the Earth’s climate system works.

“Governments depend on the accuracy of model predictions when considering policies aimed at mitigating the effects of or adapting to climate change. It is therefore important that the models are robust, reliable and credible in their predictions,” said Horsburgh.

The General Circulation Models (GCMs) used to model the interactions of the atmosphere and the oceans are mathematically highly complex. Small changes in parameters used and in starting conditions can lead to large divergences in model predictions.

An important theme of the INI programme is the better integration of different kinds of model so as to improve the variability of ensemble climate simulations, as well as their spatial and temporal resolution. A second aspect of the programme concerns statistical methods for climate prediction, including how to interpret computer simulations, and how to quantify uncertainties so as to guide policy makers.

GCMs often involve simplifying assumptions about important physical processes such as cloud formation and ocean turbulence. It is therefore important that they should be fully tested and validated.

“Scientists involved in the INI programme are also considering the important issue of how measurements are used to assess the quality of GCMs, and help in predictions,” said Huthnance.

Horsburgh and Huthnance helped to organise the public meeting in London, which will aim to build bridges between scientists, policy makers and other stakeholders concerned with the climate change debate.