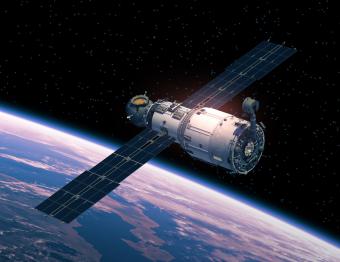 Researchers at the National Oceanography Centre (NOC) have developed a technique that, for the first time, uses reflected GPS signals from satellites orbiting the Earth to measure very high wind speeds and changes in near-surface ocean conditions during hurricanes.

This pioneering research, recently published in the leading science journal Geophysical Research Letters, has the potential to improve our understanding of these destructive weather phenomena, including prediction of their behaviour before they reach land, offering a potential to improve public safety as well as delivering tangible economic benefits.

The research by Giuseppe Foti, Dr Christine Gommenginger and Prof Meric Srokosz of the NOC demonstrates that useful observations of hurricanes can be obtained from spaceborne Global Navigation Satellite Systems-Reflectometry (GNSS-R) data, using satellites that also support the Global Positioning System (GPS) network. The reflections of navigation signals from the Earth’s surface can be used to assess hurricane structure and wind speed; previous studies have used this technique to obtain hurricane wind speed data from aircraft, but this new research shows that the same technique also works from Earth orbiting satellites.

To prove that the technique was sensitive enough to be used from space, the team analysed data from the Surrey Satellite Technology Ltd (SSTL) GNSS-R instrument mounted on the UK-funded TechDemoSat-1 (TDS-1) satellite orbiting 635 km above the Earth. Satellite data were collected between May 2015 and October 2016, and compared against hurricane data derived from three other independent sources, including the International Best Track Archive for Climate Stewardship (IBTrACS) that provides information on storm location, radius and maximum wind speed.

The study presents data from three tropical cyclones in summer-autumn 2015 in the North Atlantic and North Pacific Oceans, named Joaquin, Jimena and Chan-Hom. These data were compared to the three other data sources, revealing that the satellite-based data correctly measured variations in structure across the hurricanes (including the eye and wall of the hurricane), and were able to produce credible estimates of very high wind speeds up to 155 mph (250 km/h).

Lead author, Giuseppe Foti of the NOC, said: “This is the first step and proof of concept in an important new area of research. Developing greater understanding of hurricanes will enhance operational agencies’ ability to forecast and respond to these extreme phenomena, which will benefit coastal communities around the world. Another benefit of GNSS-R is that the instrument on-board TDS-1 is small, making the cost relatively low. The results are very encouraging and we look forward to refining this work further. The team here at the NOC is grateful to colleagues at SSTL for their collaboration, and to the Centre for Earth Observation Instrumentation (CEOI) and European Space Agency for their support.”