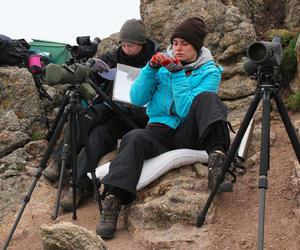 A series of new scientific papers by researchers at the National Oceanography Centre (NOC) have highlighted the importance of southwest UK waters for endangered and threatened marine life, including seabirds and porpoises. The results are being used to support marine conservation policy and showcase novel techniques and technologies for monitoring mobile species.

The research programme at NOC has been co-ordinated by Dr Russell Wynn, supported by a previous PhD student and Postdoctoral Researcher Dr Alice Jones, and current PhD student Lavinia Suberg.

The first paper reveals that the region is of international importance for the critically-endangered Balearic shearwater, and involved the collection of several thousand hours of observational data to get a better understanding of foraging and migratory hotspots for the species in UK waters. The results show that up to 2% of the global population of Balearic shearwater now regularly feed in Lyme Bay, or undertake sporadic movements around the coasts of southwest England. In addition, large aggregations comprising up to 20% of the global population were found in northwest Brittany, making them potentially vulnerable to threats such as oil spills. The paper, led by Dr Alice Jones, is published open access in the journal Endangered Species Research and can be downloaded here. 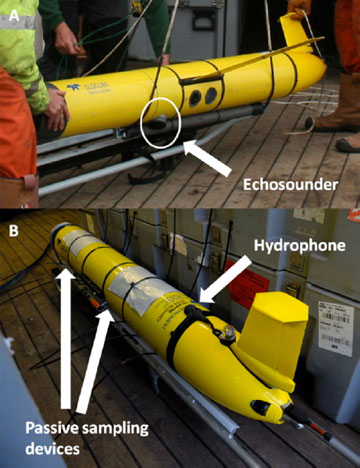 The second paper used land-based surveys, high-resolution seabed maps and 3D imaging of tidal flows to identify important sites for the harbour porpoise off southwest England. Intensive observations from a headland on the Land’s End peninsula showed that porpoises were found in greater numbers around a series of rocky pinnacles about a mile offshore, which were imaged using detailed seabed maps. Vessel-based surveys showed that tidal flows interacting with the pinnacles create enhanced turbulence and other hydrodynamic features in the water column that appeared to be attractive to porpoises. The paper is published open access in the journal Progress in Oceanography and can be downloaded here.

The third paper shows how novel combinations of sensors deployed on submarine robots can be used to collect information on mobile species and their surrounding environment. In late autumn 2013, two submarine gliders from NOC’s Marine Autonomous and Robotic Systems (MARS) facility were launched from the Isles of Scilly, carrying instruments that enabled them to simultaneously collect data on oceanographic conditions (e.g., temperature), chemical pollutants, plankton concentrations, locations of fish shoals, and clicks and whistles emitted by porpoises and dolphins. The two gliders collected data over 1000 km in a 40-day period in difficult weather conditions, revealing concentrations of plankton and fish tens of metres below the surface and detecting both dolphins and porpoises.

Speaking about the glider study, Dr Russell Wynn said “Satellite imaging can help us identify large-scale features such as oceanic fronts that may be important biodiversity hotspots, but we still need in situ data to confirm presence of mobile species such as fish and cetaceans. Using new glider technology allows us to collect these data at lower cost than can be achieved using research ships.”

The paper is published open access in the journal Methods in Oceanography and can be downloaded here.