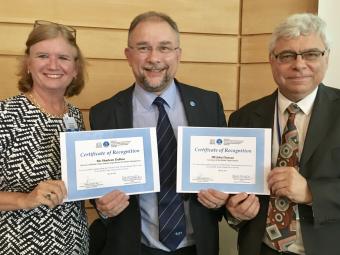 The UK delegation to the UNESCO Intergovernmental Oceanographic Commission, represented by IOC Vice Chair and former NOC Head of International and Strategic Partnerships, Stephen Hall, was honoured to accept Certificates of Recognition for successfully implementing the UNESCO IOC Tsunami Ready Pilot Project in the British Virgin Islands, on behalf of HE John Duncan, the Governor of the British Virgin Islands, and Ms Sharleen DaBreo, Director of the BVI Department of Disaster Management.

The National Oceanography Centre (NOC) has played a key role in recent years in helping British Overseas Territories and Sovereign States in the Caribbean achieve improved capabilities to detect and respond to extreme events, in particular tsunami. Through participation in the IOC in 2013 the NOC became aware of concerns from Caribbean States that the UK was not sufficiently engaged in knowledge exchange and capacity building in the region, particularly in comparison with other nations who once had a significant historical presence, such as France and the Netherlands. A meeting was convened with stakeholders active in the Caribbean from the research community, NGOs and university groups who identified areas where UK intervention could make a difference, and disaster preparedness quickly emerged as an area that needed help.

The UK represented by the NOC attended the meeting of the Caribbean Tsunami warning system in 2014 (subsequently ensuring a regular NOC presence in the community) and in collaboration with colleagues from the USA’s National Oceanic & Atmospheric Administration (NOAA) identified Anguilla and Turks and Caicos as Islands in urgent need of improvement to their tsunami warning systems, as well as seeing opportunities to work with other islands such as Montserrat, St Lucia and the British Virgin Islands where the NOC would be able to assist in capacity development and training. The addition of these sea-level stations provides multiple benefit, not only for hazard warning, but also in filling important gaps in the global sea-level observing system where the NOC plays a key leadership role in the science of global and regional sea-level change and variability.

Funds were made available from the NOC to provide new tide gauge installations on Anguilla and Turks and Caicos, and links began to be put in place with BVI, St Lucia and other islands.

In 2017 the investment by the NOC in improving capacity in the Caribbean can be demonstrated to have contributed to the important societal outcome of achieving improved preparedness for extreme events, with new instrumentation and training now enabling faster detection and response to tsunami. Moreover, UK engagement in the Caribbean tsunami warning system has improved the communication between regional states, territories and emergency services, including links back to the Cabinet Office and Foreign and Commonwealth Office in the UK. The NOC has also engaged with the cruise industry based in Southampton and the British Chamber of Shipping to suggest improvements for crew and passenger awareness of tsunami risks in the Caribbean.

Executive Director of the National Oceanography Centre, Professor Edward Hill said, “I am proud that the NOC’s scientific and technical expertise has been able to support such a demonstrable improvement in tsunami preparedness with real benefit to people and property. As the NOC engages further with international development and support for capacity development, I trust we will see yet more examples of our expertise making a tangible impact on society.”