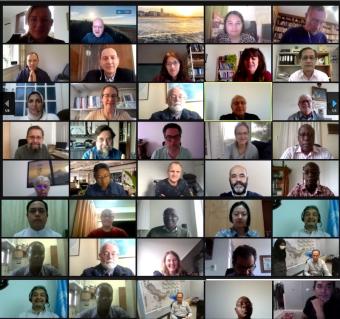 Updates on two significant ocean initiatives were discussed in the Second Session of the IOC-UNESCO Group of Experts (GoE) on Capacity Development, where Mr Evans was also successfully re-elected as co-Chair of the group for a second term.

The first update looked at the GoE efforts to identify capacity development (CD) needs across the globe and the second update related to the development of a clearinghouse mechanism (CHM) by way of the Ocean InfoHub initiative. The GoE will also establish a Task Team to identify what revisions may be required to update the current IOC CD Strategy 2015-2021. This is of particular importance in light of the many CD requirements, in no small part those anticipated to be delivered as Actions that support the UN Decade of Ocean Science for Sustainable Development.

The second event was a workshop on financing capacity building (CB) in the context of the draft Biodiversity Beyond National Jurisdiction (BBNJ) agreement. The workshop was co-hosted by Guyana, Norway, Sierra Leone and the UK in collaboration with the Pew Charitable Trusts. Their purpose was to examine the experiences of operationalising similar international agreements and the expectations and requirements of those seeking both to contribute to, and draw upon, Capacity Building and the Transfer of Marine Technology (CBTMT) under the BBNJ Agreement. The workshop also sought to better understand the roles and potential constraints of existing funding bodies and mechanisms.

As a member of the UK Delegation at the BBNJ Treaty negotiations Mr Evans was invited to share examples of how the UK supports marine related CB. He presented three example mechanisms, all of which benefit from UK Official Development Assistance (ODA) funding.