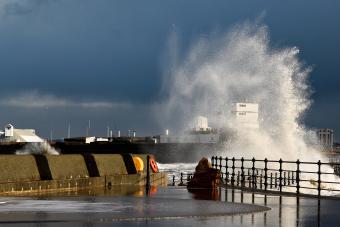 The results from our study are contrary to the prevailing view of no changes in storm surge activity and demonstrate a big step towards achieving an understanding of the influence of these mean climate changes.

A Nature-published study led by scientists at the National Oceanography Centre (NOC) has quantified for the first time that contributions from human activity may have already altered the likelihood of storm surge extremes.

The study, which was co-authored by experts at the University of Central Florida and the University of Oxford, analysed tide gauge observations using new Bayesian methods. The methods were able to leverage spatial coherence in extremes to compensate for data sparseness and showed that trends in storm surge extremes in Europe since 1960 had a comparable influence on the overall change in extreme sea levels to that of sea-level rise, contrary to past studies.

The study assessed the relative importance of external climate drivers (such as the emission of greenhouse gases) and internal climate variability in explaining the observed trend pattern of surge extremes, which revealed contributions from a dominant north-south dipole associated with internal natural causes of climate variability and a pattern of positive trends related to human factors. The results demonstrate that both human and natural influences can considerably affect the likelihood of storm extremes over periods that are long enough to have implications for coastal planning, suggesting that the current coastal planning practice of assuming stationary surge extremes may be inadequate.

In most countries, current practice for assessing future coastal flood risk assumes that climate change will have a minimal impact on the probability of surge extremes this century, with only sea-level rise considered. The results of the paper, Trends in Europe storm surge extremes match the rate of sea-level rise, are contrary to this assumption and show that human activity might have already altered the likelihood of storm surge extremes. Their findings also show that climate variations resulting from natural causes alone can give rise to trends in surge extremes of more than 2mm per year over periods as long as 60 years, comparable to the lifespans of coastal infrastructure.

Dr Francisco Calafat, lead author and senior scientist at the NOC, commented: “Ignoring this non-stationarity in surge extremes, arising from both climate change and internal variability, could cause flood defences to fail prematurely, with disastrously expensive repercussions. The substantial effect of internal climate variability (changes resulting from natural causes intrinsic to the climate system) on surge extremes over long time periods also means that large sets of climate model simulations will likely be needed to robustly identify the single human factor we identified patterns in; much larger than the current ensembles of less than 10 simulations being used for the analysis of future surge extremes.

“Furthermore, our Bayesian approach can be applied not only to surge extremes but to other types of weather extremes, and so it is transferable to fields outside sea level where the analysis of extreme events, such as heavy precipitation and high temperatures, is important.”

The inconclusive results on surge extremes given by past studies largely arise due to the difficulty of estimating event probabilities from the historical sea-level record. Tide gauge observations are noisy and incomplete with complex spatiotemporal dependencies. Traditional approaches to analysing extremes have tremendous difficulty dealing with this complexity. In this paper, a new Bayesian approach that accommodates the complexity typical of tide gauge observations and exploits spatial dependencies to overcome the difficulties related to small sample sizes is adopted. 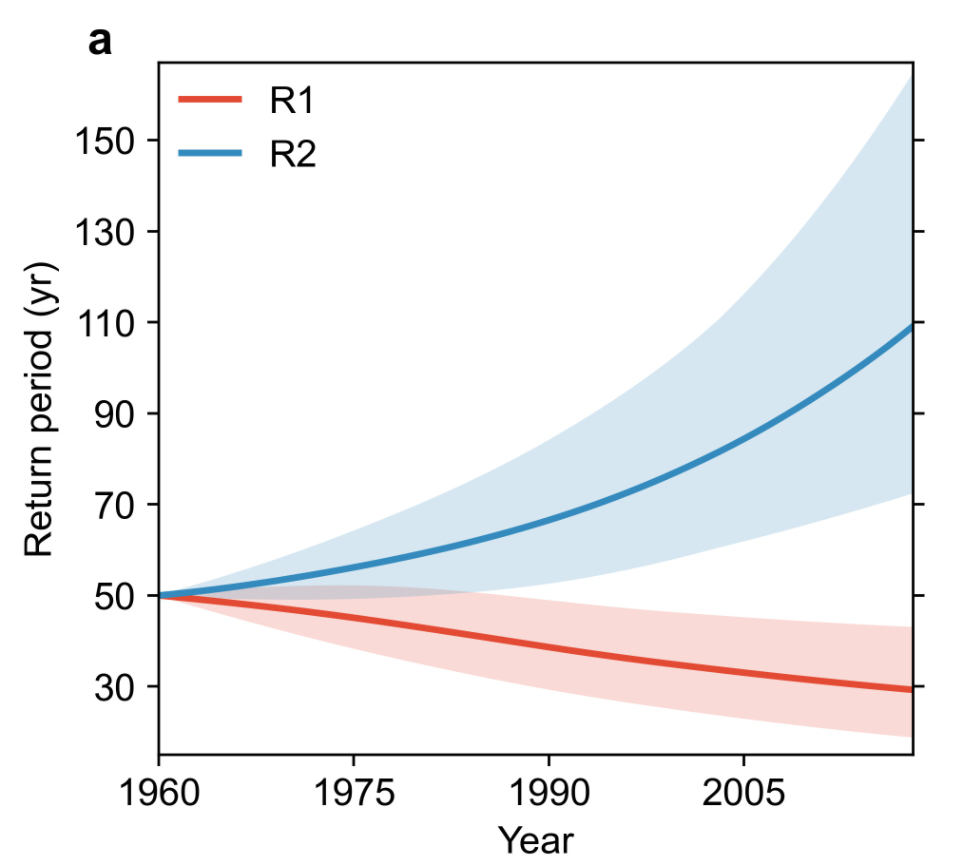 This allows scientists to separate the large-scale patterns of change from the singularities of each location and obtain estimates of trends in surge extremes with drastically reduced uncertainty compared with traditional approaches.

Collaborator and co-author of the study, Dr Thomas Wahl from the University of Central Florida, adds that “the data driven storm surge model which was developed by UCF PhD student Michael Tadesse, combined with the Bayesian statistical model, allowed us for the first time to create a large enough ensemble of storm surge simulations to separate the anthropogenic part of the trend in extreme storm surges from the natural variability. We plan to extend the analysis to other regions such the U.S. coastline where similar trends may exist but gone unnoticed.”

Francisco Calafat added: “When people hear about climate change, often rising sea levels and temperatures are the first thoughts that come to mind. However, many of the most devastating impacts of climate change are, in fact, felt through changes in weather extremes, including extreme sea levels. Climate adaptation plans are crucial to protecting people and property against the adverse impacts of changing extreme sea levels.

“However, a crucial ingredient for the success of such adaptation plans is robust understanding of how climate change affects the likelihood of extreme sea-level events. The results from our study are contrary to the prevailing view of no changes in storm surge activity and demonstrate a big step towards achieving an understanding of the influence of these mean climate changes.”