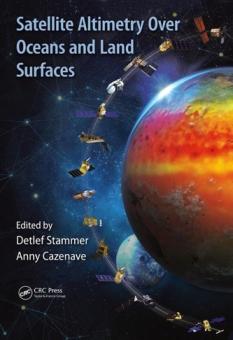 A new reference book on satellite altimetry, one of the most successful ever techniques for monitoring the oceans and climate from space, highlights the NOC’s leading role in extending altimetry to the coastal zone, the domain where the effects of rising sea levels are most severely felt by society.

A truly global measurement of sea level is only possible from the vantage point of space, using an instrument know as a radar altimeter onboard an earth-orbiting satellite. Altimeters ping a sequence of radar pulses to the surface of the oceans, and by timing the returned echoes they compute range, i.e. the distance between the satellite and the ocean surface. The difference between the orbital altitude of the satellite (which is tracked to a very high degree of accuracy using a combination of lasers, GPS and microwave measurements) and range yields the sea surface height, which can then be used to estimate surface currents and monitor sea level.

Until recently, altimeter data near the coast were discarded due to a string of technical obstacles. NOC staff have been leading the international R&D efforts that now allow the recovery of meaningful measurements of sea level (as well as of wave height and wind), a wholly new field of research known as coastal altimetry.

Satellite Altimetry Over Oceans and Land Surfaces is the new reference textbook on satellite altimetry that includes contributions from many of the leading experts in the discipline. This book includes an entire chapter on coastal altimetry, Satellite Altimetry in Coastal Regions, which reviews the many technical improvements (including processing enhancements designed and implemented at the NOC), lists the reprocessed datasets that are becoming available, and illustrates the many diverse applications of the coastal altimetry data.

“The traditional measurements of sea level, from conventional altimetry over the open ocean as well as from tide gauges at the coast, leave an observational gap in between’, said NOC’s Dr Paolo Cipollini, the lead author of the chapter. “By developing new processing techniques and coordinating the efforts of many colleagues worldwide, we have made coastal altimetry a reality and we are filling that observational gap. This is crucial to confirm the global impact of sea level rise on the world’s coasts, and inform mitigation and adaptation strategies.”

Satellite Altimetry Over Oceans and Land Surfaces has been edited by Detlef Stammer and Anny Cazenave and is published by CRC Press of the Taylor and Francis Group.