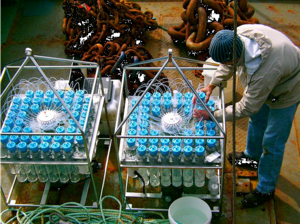 The National Oceanography Centre is leading a £1.2M NERC funded project to improve our understanding of the role of the Atlantic meridional overturning current (AMOC) in absorbing atmospheric carbon.

AMOC is part of a ‘conveyor’ of water that circulates the globe, transporting warm, salt-rich waters to the North Atlantic. A large fraction of the heat released to the atmosphere by AMOC is carried eastward towards Europe by the predominantly westerly winds, leading to warmer temperatures in Northwest Europe than at similar latitudes in Western Canada. Furthermore AMOC is important because the North Atlantic contains more anthropogenic carbon than anywhere else.

For the last ten years the temperature and flow rate of AMOC have been monitored by a transect of sensors that run across the Atlantic called the RAPID array. This project will add value to the RAPID programme by adding the monitoring of nutrients and carbon for the first time.

Throughout the duration of the project new data will be collected and modelled, and existing data will be used to make calculations of the fluxes of carbon and nutrients associated with the AMOC. Some of the first data collected will be from National Oceanic and Atmospheric Administration (NOAA) cruises across the Florida current. The Florida Current is the Northwards branch of AMOC, and so the comparison with new observations from sensors and samplers taken on the Southwards branch of AMOC by the RAPID array will allow scientists to calculate how much carbon and nutrients the ocean conveyor loses or takes up on its journey.

NOAA and the Met Office are both project partners on the ABC Fluxes consortium, which is made of the NOC, the Universities of Southampton and Exeter, as well as the Plymouth Marine Laboratory. ABC fluxes has received NERC directed funding under the RAPID-AMOC programme and will run for six years until the 30 September 2020.