NOC and KORDI to promote collaboration 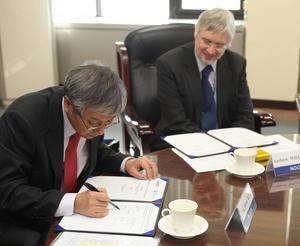 KORDI and NOC are leading national institutes of similar size. Research interests shared by the two organisations include the deep seas and the polar regions, climate change, and marine resources such as marine renewable energies. Both institutes are developing and applying new marine technologies, including autonomous underwater vehicles (AUVs) and novel sensors.

At the signing ceremony, Professor Willmott, NOC Director of Science and Technology, commented that both organisations shared a common vision, not just for ocean science itself, but also in making sure that our work had real impact in informing policy developments on a wide range of issues. These include climate change and environmental management, the development of sustainable energy supplies, and ensuring sustained observation of the changing oceans.

The signing took place at the KORDI headquarters during the annual plenary meeting of the Partnership for Observation of the Global Oceans (POGO), which was ably hosted by KORDI. For more than a decade, POGO has served as a forum for leaders of major oceanographic institutions around the world to promote global oceanography, particularly the implementation of international and integrated global ocean observing systems. This has been achieved by fostering partnerships that advance efficiency and effectiveness in studying and monitoring the world’s oceans on a global scale.