NOC at International Festival for Business 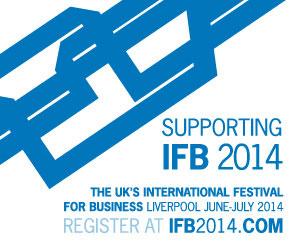 During June and July this year NOC will be participating in the International Festival for Business 2014 (IFB 2014) held this year in Liverpool.

IFB will span 50 days in June and July comprising around 290 events and around 250,000 people are expected to descend on the city, coming from more than 70 countries around the world. The aim of the festival is to showcase the best that British industry has to offer, with the objectives of generating foreign investment and increasing UK exports.

NOC will be part of the ‘IFB Hub’ during the week commencing 9 June as part of the Maritime Logistics and Energy themed week and will rub shoulders with those at the forefront of offshore renewable energy generation, as well as other representatives of the maritime sector.

NOC will present a series of seminars on Wednesday 11 June about working with its scientists and researchers, and about how businesses can access new ideas and emerging technologies, a wealth of expert knowledge, and specialised equipment and facilities. NOC will also how, in many cases, public funds can be leveraged to support collaborative projects.

NOC’s anyTide App, which has been recently updated, will also be demonstrated at the show. anyTide provides tidal predictions at known ports around the coast of the British Isles and the NW European shelf, but also has the unique feature of providing tide predictions at any point along the UK coast to the nearest 1.8km. It does this by using a sophisticated 3D computer model, developed at NOC Liverpool, to fill in the gaps between conventional tide gauge observation points in ports and harbours, giving users access to tidal data exactly where they want it.

The recent update opened the app to Android users and improved the interface making it even easier to be used by mariners, scientists, walkers and those living by the coast. Users can download for free and get tide predictions for the next 24 hours anywhere in the British Isles – plus one unlimited location (Liverpool) to allow evaluation of the app’s full features.