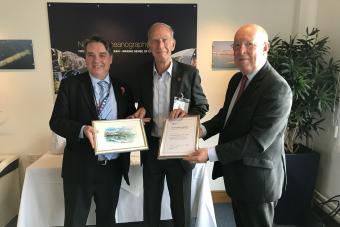 The National Oceanography Centre (NOC) has honoured Sir Robert Margetts CBE for his pivotal role transitioning the NOC from a NERC Research Centre to an independent charitable organisation.

This is only the second Honorary Fellowship the NOC has awarded – the first went to Professor Peter Liss FRS - and is the first to be awarded by the NOC as an independent organisation.

Sir Robert Margetts was appointed Chair of NOC’s Transition Oversight Committee in 2016 and then Chair of its Shadow Board which guided the path towards NOC’s independence on the 1 November. He was succeeded as Chair by John Hirst CBE in 2018 but continued as a Board Adviser. At his last NOC Board meeting on 4 November, Sir Rob was awarded the Honorary Fellowship of the National Oceanography Centre which is the highest honour the NOC can bestow - ‘awarded to someone of distinction in their chosen field who has made an outstanding contribution to ocean affairs, interpreted in a broad sense, not solely confined to scientific research achievement’.

Presenting the award alongside John Hirst, Professor Ed Hill, NOC’s Chief Executive said: “We are delighted to award a NOC Honorary Fellowship to Sir Robert Margetts. He brought a wealth of experience at a critical stage on the NOC’s journey to independence including the appointment of the earliest Board members. We are very grateful to him for his strong commitment to the success of the NOC during some of the most challenging moments on our transition.”

Accepting the award Sir Rob said: “I am delighted to receive this honour but, more particularly, to witness the successful transition of NOC to its new status. This should enable NOC to continue and build upon its international reputation for outstanding scientific achievement."

Sir Rob is a highly experienced and influential business leader. After graduating from the University of Cambridge with a BA in Natural Sciences and Chemical Engineering he joined ICI, rising through its ranks holding various senior leadership roles. He has chaired numerous companies including Legal and General Group PLC (2002–2010), BOC Group (2002–2006) and is Chairman (Europe) Huntsman Corporation. Sir Rob has also served in a number of public appointments including as Chair of the Natural Environment Research Council (2001–2006), the Ordnance Survey (2009–2016) and a member of the Council of Science and Technology (1998–2007). Sir Rob is a Fellow of the Royal Academy of Engineering, an Honorary Fellow of Imperial College and Cardiff University and was awarded an Honorary DSc by Cranfield University. He was appointed CBE in 1996 and Knighted in 2006.