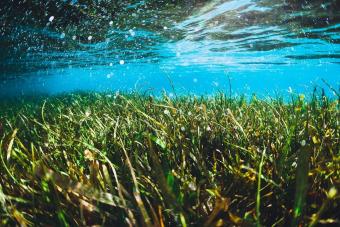 The National Oceanography Centre (NOC) spoke at a key lunchtime discussion in the Houses of Parliament this week, to mark the launch of “The Ocean: Turning the Tide on Climate Change” a report produced by the All-Party Parliamentary Group for the Ocean.

Following comments from Sally-Ann Hart MP, chair of the cross-party group, NOC’s Chief Executive Professor Ed Hill talked about the importance of science leading the debate on blue carbon solutions. A range of MPs and peers with an interest in the ocean attended the luncheon as well as representatives from the British Antarctic Survey, the Marine Biological Association and the Blue Marine Foundation. Attendees discussed the role the ocean plays in mitigating climate change and the policy options available in the blue carbon space.

Professor Ed Hill CBE, said: “The ocean is the largest active carbon reservoir on our planet, and without it the Earth would be substantially warmer than it is at present. There is no climate solution without the ocean, and it is encouraging to see this being recognised in this APPG report. Blue carbon and ocean-based carbon dioxide removal must be grounded in scientific evidence. Focused funding, such as the Natural Environment Research Council’s BIO-Carbon programme, is critical to helping ocean scientists make informed policy recommendations in the blue carbon space. Significant, sustained investment is needed from Government to support ocean science research on a scale we know we need to meet the challenges of climate change.”

The report includes a series of recommendations to Government around blue carbon and ocean-based solutions, including the adoption of a code of conduct to guide research into ocean-based carbon dioxide removal approaches, re-alignment and restoration of UK saltmarsh and seagrass habitats and the creation of a Minister for the Ocean.

The APPG for the Ocean launched the inquiry in June, with a call for written evidence which ran through August. An oral evidence session took place in October. The report takes on board written and oral evidence provided by over 30 respondents to the inquiry.

Read the full report and recommendations

NOC has a dedicated team of specialists in international and government relations and coordinators of UK marine science. Its role is to stimulate collaboration with national and international partners, advocate new approaches to policy and ensure science is at the heart of good policy-making.