NOC in The Deep 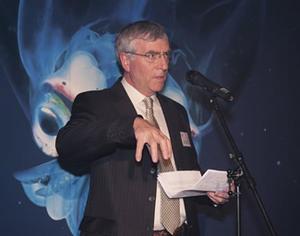 The increasing use of sophisticated Remotely Operated Vehicles, coupled with greatly improved cameras has led to a revolution in our understanding of the Deep.

The National Oceanography Centre (NOC) and the SERPENT project have contributed to a major new exhibition at the Natural History Museum, which opened on Friday 28 May.

The Deep, which runs until 5 September follows oceanographic exploration, from the HMS Challenger expedition of the Victorian era, seen as the birth of modern oceanography, to the present day, where Remotely Operated Vehicle (ROV) technology allows us to film the weird and exotic creatures thousands of metres below the surface.

Professor Phil Weaver, a member of the NOC Board who has spent much of his career working on deep-sea projects, will spoke at the exhibition opening. He said “The increasing use of sophisticated Remotely Operated Vehicles, coupled with greatly improved cameras has led to a revolution in our understanding of the Deep. A new and fascinating world is gradually emerging, that is complex, sometimes beautiful, and in many cases remarkably fragile. This environment has been described as ‘out of sight, out of mind’ and unfortunately is already being impacted by humans. It is exhibitions such as The Deep that can make this hidden world come alive and inspire people to take an interest in their planet and the impact we are having on it.”

The NOC’s Puffersphere, a giant illuminated globe showing new visualisations of changes in sea temperature, the movement of currents and the topography of the ocean floor, will provide one the focal points of the exhibition, which also features a large model and a skeleton of a sperm whale. The complex ecosystem that develops around a ‘whale-fall’, the carcass of one of the animals after it has settled on the seafloor, is a central element in the exhibition.

The NOC-based SERPENT Project (Scientific and Environmental ROV Partnership using Existing iNdustrial Technology) is a collaboration with the gas and oil industry providing scientists with access to cameras mounted on cutting-edge ROVs that provide compelling footage of sea life in oceans around the world.

“Good evening ladies and gentlemen. I am very honoured to be invited to speak at the opening of such a fine exhibition, so thank you for inviting me. I have spent my career working on deep-sea projects and for most of that time our understanding was based on samples recovered by dangling sampling devices or cameras on the end of a wire to find out what was happening in the deep dark depths. The understanding we developed was patchy to say the least.

“However, the increasing use of sophisticated Remotely Operated Vehicles, coupled with greatly improved cameras has led to a revolution in our understanding of the Deep. We can now make centimetre-scale maps, sample individual specimens, carry out seabed experiments and repeatedly return to the same location to understand change on the deep seabed.

“A new and fascinating world is gradually emerging, that is complex, sometimes beautiful, and in many cases remarkably fragile. This environment has been described as ‘out of sight, out of mind’ and unfortunately is already being impacted by humans. It is exhibitions such as THE DEEP that can make this hidden world come alive and inspire people to take an interest in their planet and the impact we are having on it.

“Relatively recent discoveries in the deep have included the discovery of hydrothermal vents emitting hot fluids. In the last two months a NOC cruise discovered the deepest known vent at 5000 metres on an ocean ridge in the Cayman Trough, Caribbean. Studying the fauna at this remarkable new site should reveal whether geological history or contemporary ocean currents shape the patterns of life at deep-sea vents around the world.

“Apart from hot seeps, cold seeps also occur on the seabed emitting methane, which can sustain communities independently of photosynthesis. In the deep Mediterranean, very salty brines seep from the underlying salt formations, forming brine pools that are devoid of oxygen. In these, our Italian colleagues discovered just last month the first metazoan animals that live permanently in an oxygen-free environment.

“Cold-water coral reefs are another unique and complex ecosystem that we are just beginning to understand. A recent study concentrated on a single sample from offshore of the Faroes weighing 18 kg in which 256 species and 4625 individuals were found. More recently, very complex ecosystems have been found in the canyons that bisect continental margins. These canyons are very energetic places providing fast-track conduits for currents and nutrients.

“Other discoveries include the ecosystems that colonise dead whale falls, as you can see in the exhibition. These are rare finds on the seabed but provide a treasure trove of new species, such as the worm, Osedax (bone-devourer), which manages to root its way into whale bones and excavate the fat without the help of a mouth, stomach, or eyes.

“So the DEEP is not flat and boring, but full of unique ecosystems. One of the fascinating issues that connects all these ‘hotspots’ is how they interconnect through larval dispersal, especially the whale falls that are randomly distributed and isolated.

“The Census of Marine Life has brought together scientists from across the world to study these and other aspects of marine life with the discovery of thousands of new species. I am pleased to say that this massive ten-year project will culminate later this year with a celebration also at the Natural History Museum.

“Of course, our funders always want to know the relevance of what we are doing as well as why it interests us. So why do we need to understand what is ‘out of sight, out of mind’? Well, sponges and cold-water corals have been the source of many bioactive compounds ranging from anti-fouling to anti-HIV and anti-cancer agents. An armour-plated snail, with the armour including iron sulphides, has been described from a hydrothermal vent. The composition of its shell is now being copied to improve body armour and scratch-free paint. And we continue to exploit the sea for fish – even to depths of 1500 metres.

“So what about our impact on this deep and dark environment – surely it is not only ‘out of sight’ but also ‘out of reach’. Unfortunately not – research has shown decadal change in seabed faunas even at 5000 metres water depth with abundances of species varying by up to three orders of magnitude in a year. We have recently shown that this is controlled by surface ocean processes, which are themselves controlled by climate. So climate change can be seen 5 km deep.

“The NOC SERPENT project that is featured in the exhibition has made excellent connections to industry, who allow us to use spare capacity on their ROVs to carry out experiments adjacent to hydrocarbon platforms. From these, we can see that recovery of ecosystems can be quite rapid in some cases, though in others, such as the destruction of cold-water coral reefs by bottom trawling, hundreds or thousands of years may be required to re-establish the complexity that is so easily lost.

“We are now in the process of defining Marine Protected Areas to permanently protect some vulnerable areas of seabed. Much work needs to be done to identify these, and much more work needs to be done to understand these and other extraordinary ecosystems on our planet. To achieve this we will need the support of all of you here and of course the wider public. So thank you for providing such a wonderful exhibition. The National Oceanography Centre is very proud to have been able to support this venture.”